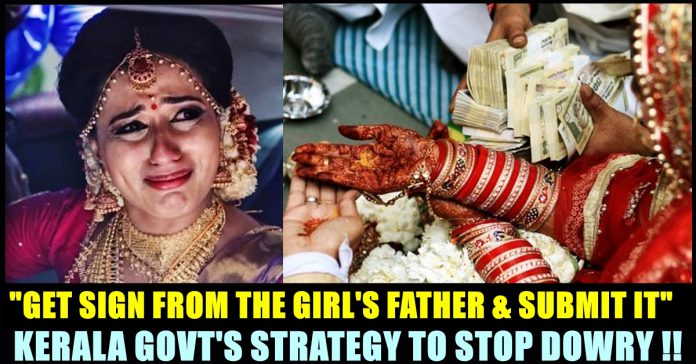 Followed by the demise of Vismaya, a young girl who cited “dowry” as a reason for her death through her messages, Kerala Government is keen on preventing men from demanding dowry from the parents of brides. As a result of several other cases emerging on “dowry” deaths, Government of Kerala has ordered all male employees of Kerala Government service to submit a declaration stating that they have not taken dowry from the bride’s family while getting married. The declaration must include the signatures of employee’s wife, father and father-in-law and should be submitted within a month of marriage.

Kerala Government’s department of Women and Child development has issued a circular instructing the same. Anupama, director of women and child development who also acts as Chief prohibition officer of the state, has directed the heads of various government departments to collect the declarations that confirms on employees have not asked or taken or exhorted dowry.

The heads of departments were asked to report of the declarations twice a year in April and October to concerned district dowry prohibition officers. “Giving or taking of dowry shall be punishable with imprisonment for a term which shall not be less than five years and with fine which shall not be less than Rs 15,000 or amount of the value of such dowry, whichever is more. Similarly, demanding dowry shall also be punishable,” reads the circular which was issued by the Department of Women and child development.

Earlier, it was reported that the Government ordered students to sign a “no-dowry bond” before college admission. Kerala Governor Arif Mohammed Khan suggested that prior to taking admission in colleges students and their parents should sign a bond that they will not engage in the practice of dowry.

The action is being taken as a result of three cases of women in their early death dying allegedly by suicide came out within a week in June. The Kerala government has also announced that it will consider November 26 as Dowry Prohibition Day and students of schools and colleges were suggested to take oath on themselves not give or take dowry.

The move is being received well by the public with many lauding the Kerala government for their progressive thinking. However, many believed that it will not change as men are potential enough to persuade the bride’s family to sign in the declaration and few also stated that the families of brides would co-operate with men who demands dowry.

Check out some of the reactions for the Kerala Government’s move :

Comment your views on this initiation of Kerala Government !!