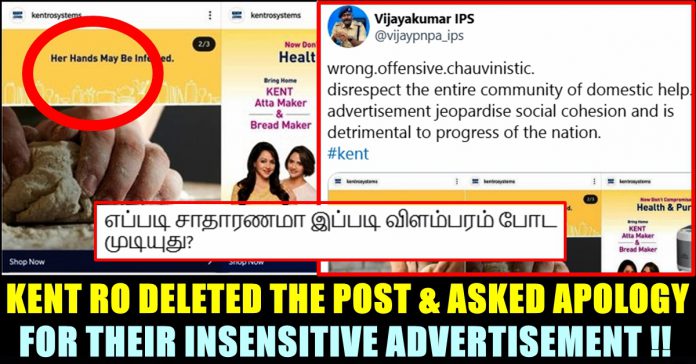 To promote their new product, Kent RO came up with an advertisement blaming maids which instigated huge outrage among netizens. Kent, a healthcare company known for its RO systems, came up with an ad for an atta and bread maker. To promote the product, their Instagram advertsement consisted phrases such as “Are you allowing your maid to knead Atta Dough by hand?” and “her hands may be infected”

This created huge outrage among the internet users as many of them came up with posts slamming the taste of their ad. The particular phase “her hands may be infected” doesn’t go well with the users of Twitter who accused the band for being “classist”.

Many of them suggested the brank to purify their thoughts before having their hands on purifying water. They called out the brand for blatantly dehumanizing the workers who are making a life out of working as maid.

Check out some of the posts of people who got extremely disappointed with the advertisement :

wrong.offensive.chauvinistic.
disrespect the entire community of domestic help.this advertisement jeopardise social cohesion and is detrimental to progress of the nation.#kent pic.twitter.com/qPIkP9jGW2

An Instagram post by @KentROSystems. As per the company, only maids can get infection, not you. An example of Spreading fear.
@dreamgirlhema#KentRo @ndtv @TimesNow @timesofindia#AbsoluteBullshit pic.twitter.com/Skt26tAVMf

I hope they realise that it was " foreign return" madams and sirs who gave the virus to the maids …. and not the other way around! https://t.co/XTc381MfWD

Controversy in marketing & advertising can be a constructive way of getting noticed, reason why some brands purposely create a splash.

The framing by Kent is most disappointing, on multiple levels 🙁 Can't the house help wash her hands? Very badly articulated reason-to-buy. pic.twitter.com/WDCeC94i0h

@KentROSystems Shame on you Kent RO Systems.. How can you stoop such low by saying maids hand may be infected.. Are you out of your mind? How dare you insult such hardworking people just because you want to sell your product?#BoycottKentROSystems #ShameOnYouKentROSytems https://t.co/auiAk7xJza

I presume #Kent Atta maker doesn't want my business. Not only is it unfair to service demographics by assuming all are unhygienic, also assumes me or my husband do not knead atta. A great product bites the dust cos the Ad agency/Product Manager couldn't see beyond their biases. https://t.co/lVCmjNG5Qp

Followed by this outrage, Kent RO deleted the advertisement and posted an apology saying that it was “unintentional but wrongly communicated”. The tweet they posted said that it was from Mahesh Gupta, chairman of Kent RO. “Please accept our sincere apologies for having published the Ad of Kent Atta & Bread Maker. It was unintentional but wrongly communicated and it has been withdrawn. We support and respect all sections of the society.” read their post.

Please accept our sincere apologies for having published the Ad of Kent Atta & Bread Maker. It was unintentional but wrongly communicated and it has been withdrawn. We support and respect all sections of the society.

Comment your views on this advertisement and the reactions it received !!