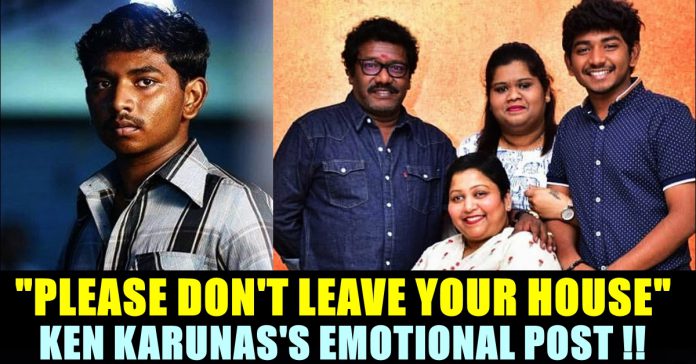 After actor turned politician Karunas tested positive for COVID 19 virus, Ken Karunas, his son came up with a press release asking people to go out only if it is necessary. The “Nandha” actor is currently quarantined at his residence in Dindigul district in Tamil nadu. Reports suggested that the actor is currently stable and has been requested to take prescribed medicines and isolate himself at home. Few days ago, a watchman guarding his house fell sick.

When the watchman’s COVID 19 result turned out to be positive, Karunas who decided to test himself found that he got infected by the virus. The actor is serving as an MLA for Thiruvadanai constituency as a All India Anna Dravida Munnetra Kazhagam led by Edappadi K Pazhaniswamy.

Now, his son Ken who received widespread acclaim for his performance in Danush-Vetrimaaran’s “Asuran”, came up with an important post. Ken said that his father got exposed to the virus as he was visiting so many places in the past days as a social worker and politician. He assured that he was safe with his mother. He thanked everyone who inquired about the health condition of his father.

Ken also asked people who contacted his father in the past few days to check with a doctor and isolate themselves. The young actor asked people not to leave house until it is necessary and added that it will affect the mental state of the family members, indirectly denoting the trauma he went through when his father was out.

For the past couple of months, more than 20 MLAs in Tamil nadu have tested positive for the COVID 19. Some of them including J.Anbazhagan of DMK, were spearheading the relief efforts in several areas across the state.

On the acting career front, Karunas who got introduced by Ameer in “Nandhaa”, is going to be seen in Suriya’s “Soorarai Pottru”. Karunas’s some of the notable projects are from “Pithamagan”, “Thiruda Thirudi”, “Villain” etc. He also did lead roles in “Dindgul Sarathi”, Amba Samuthiram AMbani” etc. As far as Kollywood industry is concerned, actress Aishwarya Arjun who tested positive earlier, recovered from the virus. Actor Vishal revealed that he tested positive while helping his father who was COVID 19 patient. He also got cured due to Ayurvedic treatment. Lately, legendary singer SP Balasubramaniam uploaded a video saying that he got mildly affected by the virus and isolated himself.

We can say that no one who is having a smart phone is unaware of Face filters. It is something which reduced our effort...