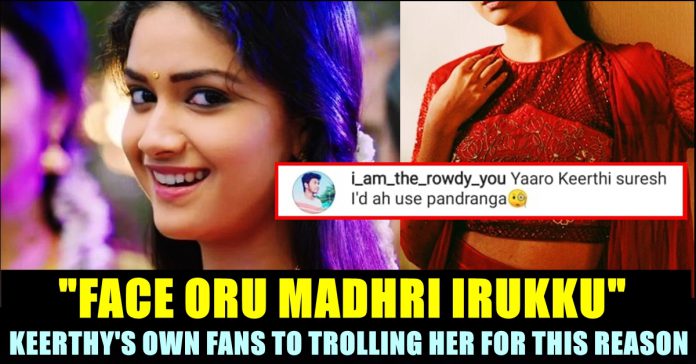 Keerthy Suresh’s latest post in her official Instagram account left her fans in a disappointed state as she delivered a massive transformation from her older looks. Keerthy Suresh is an Indian film actress who appears in Tamil, Telugu and Malayalam films. Post the success of Mahanati, Telugu and Tamil actress Keerthy Suresh now has a handful of projects in both the languages. The actress has a huge fanbase for her appearance and acting skills. She currently enjoys 44 lakh followers for her official Instagram account.

In her recent post, Keerthy Suresh was seen wearing a simple Chudi thar and her post seems to be a promotional one for a product. Check out her post below here :

Many fans who saw this post from the actress, got disappointed as she looked different comparing to her older looks. They started suggesting the actress to gain weight and to eat well. Many of them requested her to come back in her old look. Check out some of their reactions below :

From Mahanati to the recent pictures, Keerthy’s transformation is truly unbelievable. And the most recent picture which Keerthy posted on her Instagram account received similar reactions. Check out her recent posts below :

In Tamil, Keerthy was last seen in Sarkar which featured Vijay in lead role and was directed by AR Murugadoss. Although a brief role, Keerthy shined bright in her part and left her fans impressed. She is all set to appear in a movie named as “Penguin” which is produced under Karthick Subbaraj’s Stone Bench productions. However, the most expected project of the actress is “Thalaivar 168” which is going to be directed by Siruthai Siva. For the first time, she is going to share screen space with Rajinikanth and Nayanthara in the film.

Keerthy Suresh bagged the “Priceless Jewel of South cinema” award in the Wonder Women Awards conducted by Galatta youtube channel. She was also declared as the Best Actress at the 66th National Film Awards for her terrific performance in Telugu film Mahanati. The film, based on the life of actress Savitri, garnered much appreciation and love for Suresh, who brought alive the iconic star with such grace and exuberance.

Comment your views on these reactions from her followers !!

Previous articleWhat Happened To The 15 Lakh Promise Of BJP Party ??
Next articleFollower Expressed His Hatred Towards “Eruma Saani” Harija !! Here’s How She Replied

Losliya Spotted For The First Time Outside Bigg Boss House !! GOT TROLLED !!

Since the finale of Bigg Boss show, unlike other contestants Losliya avoided appearing in social media platforms initially. Now pictures and videos of her...