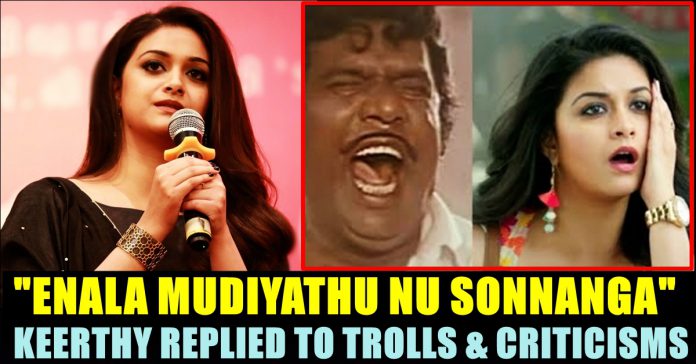 Keerthy Suresh bagged the “Priceless Jewel of South cinema” award in the Wonder Women Awards conducted by Galatta youtube channel. The actress who is currently busy in shooting for Superstar Rajinikanth’s 168th film, received the award from her best friend and director Atlee. She was also declared as the Best Actress at the 66th National Film Awards for her terrific performance in Telugu film Mahanati. The film, based on the life of actress Savitri, garnered much appreciation and love for Suresh, who brought alive the iconic star with such grace and exuberance.

Now after receiving the award from Atlee, Keerthy Suresh said “I feel so special to receive this award from my friend. He came for the last time as well. I congratulate all the “Wow” women who are present here. I feel extremely happy to be recognized in front of all these women.”

“Many people said that I can’t do that role. Many others asked me whether am I going to get a national award by doing that role. I think I have replied to them in a perfect way.” said Keerthy Suresh after receiving the award.

On Keerthy Suresh getting the award, Director Atlee said that he watched the monitor videos of the film before its release and got amused of Keerthy Suresh’s acting skills. “Our gang watched the film in Hyderabad and on the very moment I predicted that she would get a national award for her acting” said Atlee.

Keerthy Suresh is an Indian film actress who appears in Tamil, Telugu and Malayalam films. Post the success of Mahanati, Telugu and Tamil actress Keerthy Suresh now has a handful of projects in both the languages. Keerthy will also make her debut in Bollywood with Ajay Devgn’s film which will be a sports period drama. She also completed acting in “Penguin” under Karthick Subbaraj’s Stone bench productions.

Keerthy is one of the few actresses who enjoys fandom in both Telugu and Tamil. In a short span of time, Keerthy has risen through the ranks and has worked with most of the top stars in Tamil like Suriya, Vikram and Vijay. In Telugu, Keerthy has worked with Pawan Kalyan in Agnyathavaasi and is most sought-after actress presently.

Director Velu Prabhagaran who is known for directing films since 1989, in a movie event, made a statement on the actress Nayanthara selling the...

In an unexpected turn of events, a man who belongs to Kerala received a challan from traffic police which alleged he was fined Rs....

It has been reported that the water from Chembarambakkam lake is going to be released by the noon of Wednesday. The lake's depth crossed...