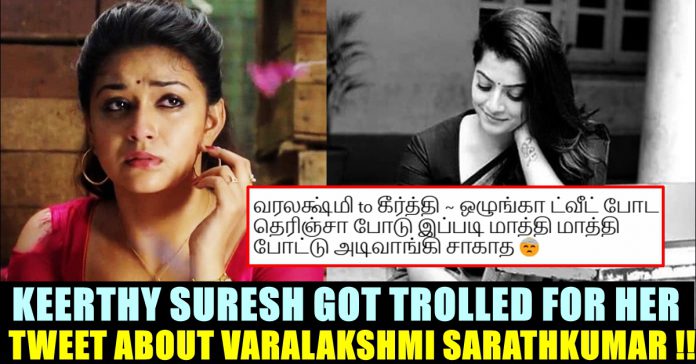 Keerthy Suresh Got Trolled For Her Tweet About Varalakshmi Sarathkumar !!

Actress Keerthy Suresh, one of the most loved new age actress of South India, got trolled by a number of twitter users after wishing Varalakshmi Sarathkumar two days before her birthday date. The trolls surfaced in the comment section of the reply tweet uploaded by the “Podaa Podi” actress. The duo worked together in the sequel of Linguswamy-Vishal’s blockbuster flick Sandakozhi and Vijay starrer Sarkar.

Sharing an adorable picture of herself laughing with her dear friend Varalakshmi Sarathkumar, Keerthy Suresh, on third of March, uploaded a tweet writing “Happy Birthday Varuuu . . May you have the happiest birthday and the best year ahead” by tagging her sandakozhi-2 co-star.

The tweet garnered huge reception in no time with thousands of her followers wishing Varalakshmi a happy birthday. As soon as Keerthy uploaded the tweet, Varu came up with a reply tweet thanking her for the wish. However, she also enlightened her friend about the exact date of her birthday.

“Thank u chellamm but my birthday is on 5th” wrote Varalakshmi Sarathkumar in her reply tweet. Earlier the day, the actress who seemingly received birthday wishes from many of her friends, colleagues and fans, uploaded a tweet saying “Thank you all for the advance wishes.. but my birthday is on the 5th of March.!!!”

Thank u chellamm but my birthday is on 5th https://t.co/xz0fUYX5p0

The reply tweet uploaded by Varalakshmi to Keerthy grabbed the attention of the online users and caused severe trolls against the “Sarkar” actress. Memes and reactions carrying the templates of Vadivelu and many other comedy actors started surfacing in the comment section of Varu’s reply.

In Tamil, Keerthy was last seen in a murder mystery named “Penguin” produced under Karthick Subbaraj’s Stone Bench productions. Post the success of Mahanati, Keerthy Suresh started signing several projects and became one of the prominent actress of South Indian film industry. She paired with Vijay, Mahesh babu, Suriya, Vikram, Nagarjuna and many other top actors.

However, the most expected project of the actress is “Annaththe” which is being directed by Siruthai Siva. For the first time, she is going to share screen space with Rajinikanth and Nayanthara in the film. Varalakshmi sarathkumar who is busy with the release of her Telugu film “Naandhi”, is expected to appear in several films including “Ranam”, Katteri”, “Paamban”, “Chasing”, “Piranthaal Parasakthi”, “Yaanai” etc.

Previous article“No Party Will Have The Power To Oppose AIADMK If We Win The Upcoming Election” – CM EPS To Party Workers !! WATCH
Next articleMegha Akash Trolled Her Instagram Followers !!

On 8th of March, Yuvaraj, a self styled leader of a caste Hindu outfit was sentenced to life-time imprisonment for the murder of a...