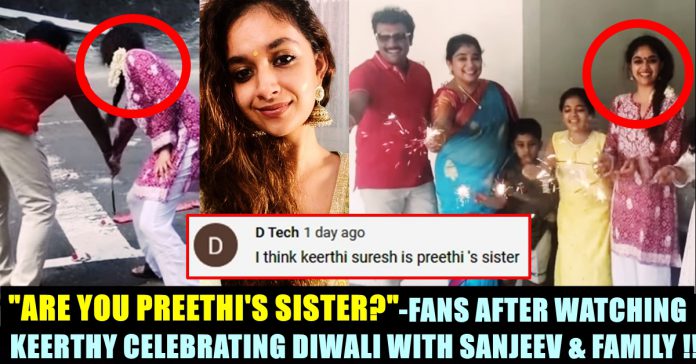 Post Diwali celebrations, Tamil cinema celebrities were busy posting videos and photos captured on the special day of the festival of lights in their respective social media accounts. They treated their fans with wishes and with the adorable attire they donned on the special day. “Let your light shine always ✨” said Samantha to her 1 crore plus followers in Instagram by uploading a couple of pictures of herself wearing a yellow kurti.

Hansika Motwani uploaded her family picture and said “Happy Diwali 🪔. From my family to yours💛”

“May we all truly understand and live the essence of what the day stands for inside and out” said Anushka to her followers.

Keerthy Suresh also flooded her social media accounts with the pictures from her Diwali celebrations. “Started with dressing up and mandatory Diwali poses!” Keerthy wrote in her first post by uploading a series of her solo poses followed by which she uploaded the videos of herself bursting crackers. In her third post, the “Sarkar” actress who is seen lying on a grass surface, wrote “Then 💤 happened. 😜”

Meanwhile, former TV actress Preethi Sanjeev also shared the same video uploaded by Keerthi suresh in her youtube channel “Preethi Sanjiv”. In the video which was titled as “Diwali celebration vlog”, we could see “Thirumathi Selvam” fame Sanjeev who is very much known as a dear friend of actor Vijay, his wife Preethi Sanjeev and their kids celebrating Diwali enthusiastically.

Surprisingly, we could also see actress Keerthy Suresh celebrating Diwali along with them in the 3 minute 41 seconds long video.

On seeing Keerthy Suresh in the video, many followers of Preethi’s youtube channel asked how they are related. “Unglukum keerthi suresh…how u r all related.” asked one of a follower whereas another one asked “Keerthi suresh unga relative ah”. A follower went one step ahead and assumed that Keerthy and Preethi are sisters.

However, Preethi, in an earlier interview with Behindwoods, has revealed that Keerthy Suresh is a neighbour to her. They all living in a same apartment that is located in Chennai. Talking about Keerthy’s humble nature, Preethi said “It became like she is one more kid to me.” in that interview. “I will share my recipes to her as she is a pure vegetarian similar to me. She will be playing as equal as my kids. My kids will be waiting to meet her daily.” Preethi shared.

Previous articleTamil Actress Condemned Virat Kohli For His “No Crackers” Comment !!
Next article“How Cruel You Are” Fans To The Girl Who Acted In “Soorarai Pottru” !! Check Her Reply