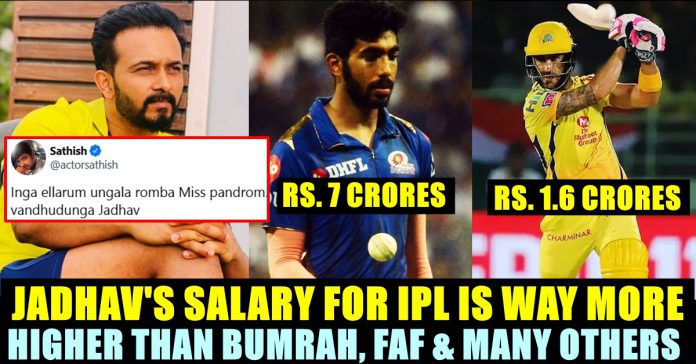 If he played with a strike rate of just 100 in the 10 balls he faced, Chennai Super Kings would have easily won the match against Sunrisers Hyderabad. Kedar Jadhav. His role in the team is the million dollar question doing rounds in the social media platforms right now. The alleged middle order batsman of the yellow team, scored 51 matches in the four matches CSK played with an average of 17. In the first three matches, fans blamed Murali Vijay and Watson for the team’s poor performance. Now, as the Indian opener got dropped, Jadhav garnered huge reception from them to an extent his name is trending in the micro blogging social media site.

In the match played against SRH, Jadhav scored 3 runs facing 10 balls. Ironically, the team lost the match by just 7 runs despite of Dhoni and Jadeja’s struggling performances with the bat. Ardent fans of the Chennai team, questioned the existence of Jadhav as his scores in the last 3 matches were 22, 26 and 3 with a strike rate of 108. 51.

With Tamil nadu based batsman Jagadeesan is sitting in bench, fans questioned the team management why they are still giving opportunity to the 35 year old. His name is trending in national level with 12 thousand plus tweets slamming his poor performance. On knowing about the fact that he is being paid more than the leading bowler of Mumbai Indians Jasprit Bumrah and few other prominent players, frustrated fans,thrashing him left and right.

Jadhav received Rs. 7.8 Crores to represent CSK as a middle order batsman whereas Bumrah gets Rs. 7 Crores and Faf was bought by CSK for just Rs. 1.6 crores. Fans are also enraged realizing that Faf who was looking good in the middle, got out while running with Jadhav.

Check out some of the reactions under the hashtag “Jadhav” below :

Kedar Jadhav – 7.8 Cr brought by CSK before the 2018 IPL auction – his only contribution for the franchise has been vs MI in the opening match of the 2018 IPL.

Just want to Remind you

Kedar Jadhav, dude it's time. Fake an injury and bless us. Ffffckkk offf

Faf run-out by Jadhav.
Jadhav out next over.
Me to Jadhav : pic.twitter.com/CEOGBKJsBT

Wonder who's going to ask the question to @msdhoni about @JadhavKedar's role in this @ChennaiIPL team.
I'm sorry, but he's an absolute disgrace..#CSKvsSRH #Dream11IPL

Jadhav and his selection in CSK every match is a mystery similar to how china successfully controlled corona outbreak in their country..

Why is Jadhav a cricketer?

And just get yourself hurt and GET out from IPL !

Comment your views on the innings played by Kedhar jadhav !!

Hashtag "பால்வாடி பாஜக" which roughly translated as "Pre Kindergarten BJP" is trending in the micro blogging social media site since Monday morning after the...