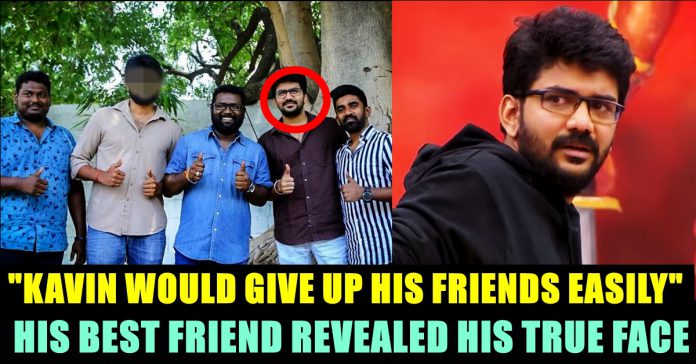 Raju who worked with Kavin for a very long time has appeared in an interview regarding Bigg Boss, especially regarding Kavin. In the interview, Raju exposed what kind of person Kavin actually is in a most humorous way.

“If Kavin gets a chance to watch his own episodes, he would completely change as a person. Through the audience claps in the weekend shows alone, Kavin predicted Tharshan as the contestant with most supporters and started saying that he would sacrifice the title if he wins.” said Raju in the interview with Galatta youtube channel. “He is staying inside the house with sympathy votes” he added.

Raju is acting along with Kavin since Kana Kaanum Kaalangal days. They shared screen space in the movie “Natpuna Ennaa nu Theryuma” in which Kavin acted as protagonist. Kavin who is one of the very well known contestants of the BIGG BOSS show before entering the house has became the topic in social media platforms for not so good reasons.

In the very first episode, Kavin declared that all the four young girls in the house are his lovers. Though it looked funny initially, viewers started getting irritated on seeing his further activities. The way he tries to be a good person to everyone inside the house gained him no good name among the housemates and among the audience as well.

Raju said that audience are not even clapping when Kavin’s name is said which proves that he is doing something wrong inside the house. “Housemates of this season are not respecting Bigg Boss in this season” Raju alleged. “Did you go to Bigg Boss house to make love?? why did you choose Losliya to do that ?? She has a bright future in Tamil cinema as she would become an actress like “Keerthy Suresh” said Raju in his interview.

Raju, in a humorous way said that he is wasting the platform of Bigg Boss. “The show is being watched by many people across many countries including Malaysia and Sri Lanka. It is our wish to get recognised by people and acted in a film which got flopped. Now they are watching in daily basis but Kavin is not playing the game responsibly.” he stated in the interview.

“Kavin is a person who would think so much for himself. He wouldn’t do anything for friendship. Maybe he would give up a friend for another friendship” he added.

What do you think on this interview of Raju ?? Comment your views below !!