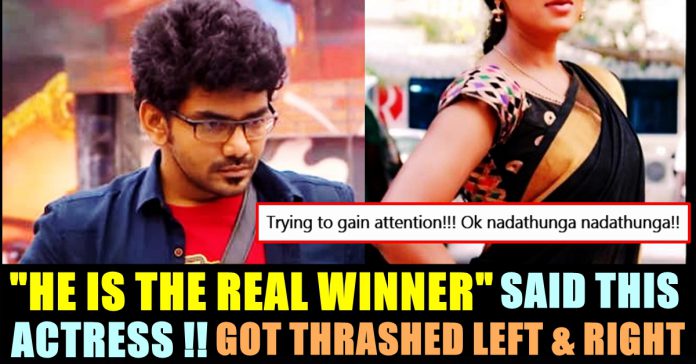 As soon as Kavin got out of the Bigg Boss house with 5 lakhs, the viewers of the show including the evicted contestants started filling Internet with their opinion on his decision. Though the housemates compelled Kavin to stay inside the house for 3 more days till weekend, Kavin adamantly went out of the house without considering the tears shed by Losliya and Sandy.

Along with his fans, Reshma Pasupuleti, one of the evicted contestant of the show also posted her opinion on the actor walking out of the show. She said that Kavin is an amazing person and had the guts to do it. She also admitted that Kavin is the winner according to her.

The tweet of Reshma read as “I totally support Kavin with his decision he is an amazing person and he did what others wouldn’t do or have the guts to do it. Call it sacrifice or giving up I don’t care he’s a winner according to me”

I totally support Kavin with his decision he is an amazing person and he did what others wouldn't do or have the guts to do it. Call it sacrifice or giving up I don't care he's a winner according to me @kavin_actor @BiggBossTamil_4 @vijaytelevision @ikamalhaasan @kavinarmy2

However, this tweet doesn’t go well with her followers as they slammed her severely for the tweet she posted. The people who believed that Kavin used the other contestants stormed into Reshma’s comment section and started criticizing her. Check out some of their reactions and Reshma’s reply to them :

I have loads of attention bro don't need to gain anythin new. I wrote my heartfelt congrats to Kavin adheyum neenga kevala padutha Naa only God can help ur thinking

Brother Sakshi also feels the same way no matter what me Sakshi, we all love and respect eachother. No one can understand our friendship. Pls don't talk bad abt Sakshi she respects Kavin aswell. No one is perfect.try to understand that

Yes he can flirt with shakshi then leave her and massage losiliya in front of her . Even he had not loved shakshi. Just by understanding her feelings he should've done rubbing of losiya to respect others feeling.

He didn’t scarifice ..he is not capable for this show .ask him to share all the money earned from https://t.co/2da0lmMod0 with their friends ..then we will think whether he does scarifice or not?!

Don’t call it sacrifice, he unable to face the fear of facing people’s outside .

Reshma became the fifth contestant to get eliminated from Bigg Boss Tamil 3. After getting evicted, in one of her interview, Reshma revealed how money plays a vital role among the contestants of current Bigg Boss show. Reshma even asked Kavin to pay the college fees of her son during a conversation. She even stood up for him during the controversy of his mother’s conviction took place.

Let’s pray and not judge others let’s be above all the hate. We can only hope everything will be alright. Spread positive thoughts towards a negative situation, our thoughts have power. I’m praying for your family @kavin.0431 @kavin_army_3.0 @kavin_forever_army @biggboss3.0tamil @biggboss3 @ikamalhaasan @endemolshineind @vijaytelevision