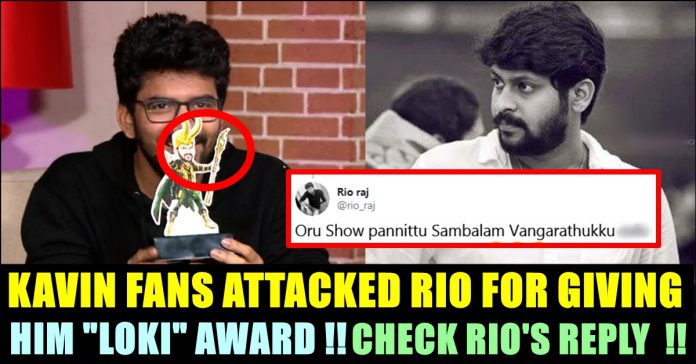 Rio Raj who recently debuted in Tamil film industry as protagonist through “Nenjamundu Nermayundu Odu Raja” film is currently hosting selective shows in Vijay Television. Recently, he hosted the “We Are The Boys” gang of Bigg Boss Tamil 3 along with Ma Ka Pa Anand and show streamed on Sunday noon.

“We are the Boys” is a gang formed by the five contestants of Bigg Boss Tamil season 3. It consists of Mugen, Sandy, Tharshan, Kavin and Losliya and they spent their days inside the Bigg Boss house as a team.

Now, as the season ended, Vijay Television conducted a separate episode, in a way of celebrating the “We Are The Boysu” gang. In the show, Rio Raj and Ma.Ka.Pa asked several questions to the contestants including who is the dirtiest contestant inside the house.

During the end of the show, all the four contestants who participated were given a super hero toy as a gift by the hosts. Sandy was given a toy of “Deadpool” and they called it as Sandy Man. “Rainbow Rockey” Mugen received “Thor”toy. Tharshan got Captain America toy which was called as “Thar Man”.

The toy of “Loki” was given to Kavin who received it with a happy face. However, this irked the fans of Kavin in social media who started trolling Rio Raj for giving Kavin, a “Loki” toy.

This made Rio Raj to write a post in order to explain why he gave those toys to those contestants. In his post Rio said that he they gave Loki to Kavin only because he is a game changer and by considering Loki as a Norse God. Check out his tweet below :

Thor – Powerful and a winner @themugenrao
Captain America – self made and a leader @TharsanShant
Loki – Powerfull Norse God and A game changer #kavinarmy
Deadpool- genius and playful hero. Entertainer throughout #sandymaster
We think it in a Good way 🙏🏻#AmtiredofTrolls pic.twitter.com/mBqU5hmQSB

Followed by this tweet, Rio also asked everyone to think before tweet. “Just Because we are a Media Toy it’s not meant to be Taken for Granted 😤 #BiggBossTamil3 Oru Show pannittu Sambalam Vangarathukku evlo Kashtappada vandirukku…. 😤😤😤”

@rio_raj
Liked you from sun music and SM serial…
But that show with girls was not decent…
Didn’t u act with #Kavin in kalloori salai serial?
Media solrathu kekrathu is ur job, I agree… but the way you deliver it shows your real jealousy/hatred/insecurity towards #Kavin..

We always support our nanban kavin 💪

It’s not trolling but our pain and anger. if u watch the episode u cud see kavin was hurt and while others kept their gifts in their hands, he kept it aside. He deserved an ironman who was a playboy initially but changed and stood for his frnds till the end. #ironmankavin

Bro ..then y u asked Kavin sarcastically that i am also ur friend , but you are reserved. How you treat friends in bigboss house like this?you know how much he going through…As a friend don’t demotivate him bro.

What do you think on these comments received by Rio Raj ?? Let us know your views !!

Previous article“Eruma Saani” Youtube Channel Facing The Wrath Of Social Media For Their “Pullingo” Video !!
Next articleWATCH : Meera Mithun Says That “We Are The Boys” Gang Loved Her !!

Deputy General of Viduthalai Chiruthai Katchi who is also a sitting MLA of Nagapattinam constituency, opened about his relationship with Azeem, one of the...

AB DE villiers yesterday revealed about the long time controversy about his participation in the world cup as a player. The south african cricketer...