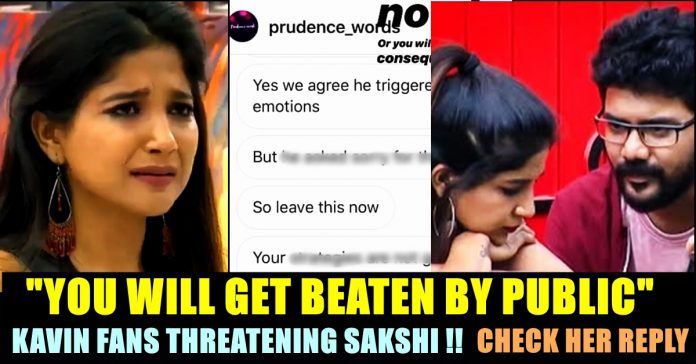 For questioning about Kavin’s activity inside the Bigg Boss house yesterday, evicted contestant Sakshi Agarwal has received severe threatening from fans of Kavin in Instagram.

The screenshots she posted as stories shows the actress being in the receiving end of the threatening. “Stop sending me warning & abusive msgs, will reveal all of it, Keeping quiet to maintain my sanity. Cant even reveal the rest of the msgs” wrote Sakshi in her story while sharing the screenshot.

In the screenshot, we can see a guy asking Sakshi not to damage Kavin. He also said that it is a warning. Check out the screenshot here :

In the next story, we can see a guy saying that Sakshi will get beaten for damaging Kavin’s name. He also warned her to be careful. In this story, Sakshi wrote “#KavinArmy stop this paid fake accounts threatening me right now !! or you will face the consequences”

Sakshi Agarwal is one of the evicted contestant who is very much active on Social media platforms since her eviction. Her existence inside the house made much impact as she maintained a strong bond with the other contestants. During her stint inside the house, Sakshi was seen attached to the contestants very much, especially with Kavin, the Saravanan Meenatchi star and Sherin.

On watching one of a recent episode, Sakshi reacted to it by posting a selfie video in one of the social media platforms. The reason behind threatening she is receiving in Instagram is the video she released. In the video, the actress is seen talking about Kavin’s statement in the show when he was asked to justify that he deserves the title.

“I want to ask three questions as I have watched the today’s episode of Bigg Boss. Firstly, who proposed whom ?? Did Kavin proposed me or I proposed him ?? Housemates know the truth but I suspect that audience are not very much clear about this.” said Sakshi in the video.

“The second thing I want to ask is, who gave him the rights to shout at me that way ?? Can he shout at Madhumitha or Vanitha like that ?? I only forgave him due to the bond we had at that time” she added.

“Kavin is the one who talked about our marriage. He even said to Sherin that she has to come to his house in future to meet me as we are going to be in the same house. You may take the relationship of girls for granted but we are not.” She said in the video.

BREAKING : Brief Explanation Of The Guy Who Asked “Who Are You?” To Rajinikanth !!

Rajinikanth has reached Tuticorin to visit those injured in the police firing that claimed 13 lives. “I am going to the hospital in Thoothukudi...

Tamil nadu BJP leader Annamalai IPS who recently grabbed headlines after being called as "Chinna Sanghi" by Senthil Vel, one of the administrators of...