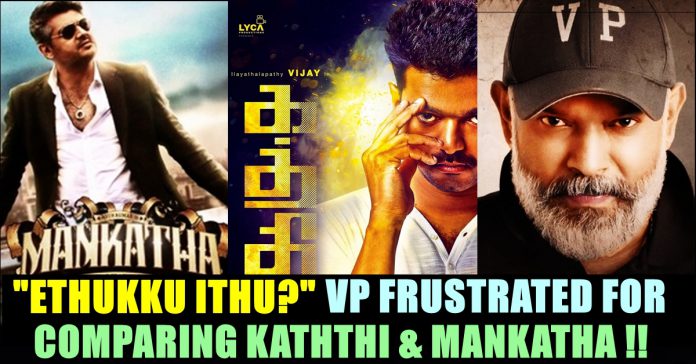 The rivalry between the fans of “Thalapathy” Vijay and “Thala” Ajith has always been a never ending one. Its been a long time since actor Ajithkumar and Vijay declared as official rivals. Though the actors themselves enjoying a healthy friendship between them, verbal spats between their fans is taking place in many occasions, especially when their movies are getting to release simultaneously. Then it took place in movie theatres but now as social media became an easily accessible one to every smartphone users, they started to make points to prove their star as the highly talented one.

Apart from verbal spats, several polls are being conducted to determine which star has the highest fan base. Though it raises the market value of both the stars, many celebrities didn’t like it as it contains abuses and fights. Now one of a popular twitter handle with lakhs of followers conducted a poll asking which theme among Kaththi and Mankatha is better comparing to the other.

Which is your All time favorite BGM ? 🔥😎

This tweet from the handle receiving several reactions from the fans of both the actors as they are desperate to prove their favourite idol’s theme is better. However this tweet grabbed the attention of director Venkat Prabhu who made Mankatha movie.

The filmmaker who dislikes such fights between fans, in his tweet said that the themes for the movies are composed by considering the genres. Apart from the fans of the actors, this poll also instigates a spat between the fans of the music composers. Venkat Prabhu, in his tweet, requested the fans not to compare but to celebrate the music.

The tweet of Prabhu read “Themes are done according to the genre of the film!! Both are superb in their own ways!! Please don’t compare guys!!! Already nalla poitu irrukku!! Edhukku idhu!!! just celebrate music😊”

Check out the tweet posted by the filmmaker here :

Themes are done according to the genre of the film!! Both are superb in their own ways!! Please don’t compare guys!!! Already nalla poitu irrukku!! Edhukku idhu!!! just celebrate music😊 https://t.co/y2uRv7jedC

Venkat Prabhu is one of the filmmaker who is expected to do a film by having both Vijay and Ajith as leads in a film. Followed by his request, many fans supported him by posting positive comment to his tweet. Check out few of their reactions below :

both r special to both fans.. media better avoid to create such ruckuss

Both the actors are praised for their respective skills and has separate fan base as we all know. Ajith who is known for his screen presence and has set the screen on fire while making his entry in his films. Meanwhile Actor Vijay known for his exceptional dancing skill and dialogue delivery.

Tamil nadu assembly election for the year 2021 is nearing with so much drama to an extend that it could easily be made into...