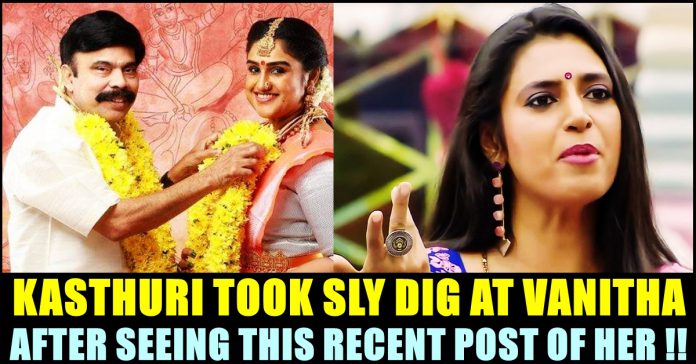 Amidst the speculations that are emerging in social media platforms about the recent picture uploaded by Vanitha Vijayakumar in her official twitter handle, Actress Kasthuri came up with a tweet confirming that it was for a film promotion. She also took a sly dig at the “Cooku with Comali” season one winner, saying that it is “OK” to think that it might be the next marriage of Vanitha and added that one can’t think of the same while seeing her with Power star Sreenivasan. The actress tweeted it as a reply to a twitter user who asked her whether she got scared of Vanitha now.

On Wednesday, Vanitha Vijayakumar came up with a post in her official twitter and Instagram handle. The picture showed herself and Power star Sreenivasan donning bride and groom attire respectively. Power star could be seen holding the garland of Vanitha and the post suggested that they are getting married. Tagging Power star, Vanitha added heart emojis as her caption for the post.

Vanitha Vijayakumar started her acting career in the year 1995 through a film named as “Chandralekha” in which she paired opposite to actor Vijay. Vanitha’s personal life had always been under the scanner of media and public. After a number of failed relationships, the actress recently got married to a man named Peter Paul and broke her relationship with him due to his habit of excessive alcohol consumption.

Now, on seeing this picture with Power star, many started trolling Vanitha, assuming that she is getting married again. However, many believed that must be a promotion for one of her upcoming films. Meanwhile, a twitter user tagged Lakshmy Ramakrishnan and Kasthuri Shankar and asked why they are remaining silent this time. He questioned them whether they are scared of Power star or Vanitha.

On seeing the tweet, Kasthuri replied saying “Sigh. How responsible our citizens are. It is “okay” think that it is Vanitha’s next marriage but couldn’t you understand that it is a movie after seeing Power star in it ? Go and educate your children man” she said in her tweet.

On the work front, she is going to act along with multifaceted Samuthrakani in the remake of Bollywood blockbuster “Andhadhun” in which Prashanth, Priya Anand and Simran are playing the lead roles. She also took part in the “Bigg Boss” Jodigal show of Vijay Television and making contents for her 6 lakh plus subscribers in youtube.

Previous articleThis Young Tamil Actress Says That She Refused “Arjun Reddy” Because Of the Intimate Scenes !!
Next articleRavindra Jadeja Facing The Heat Of Social Media After Boasting His Caste !!