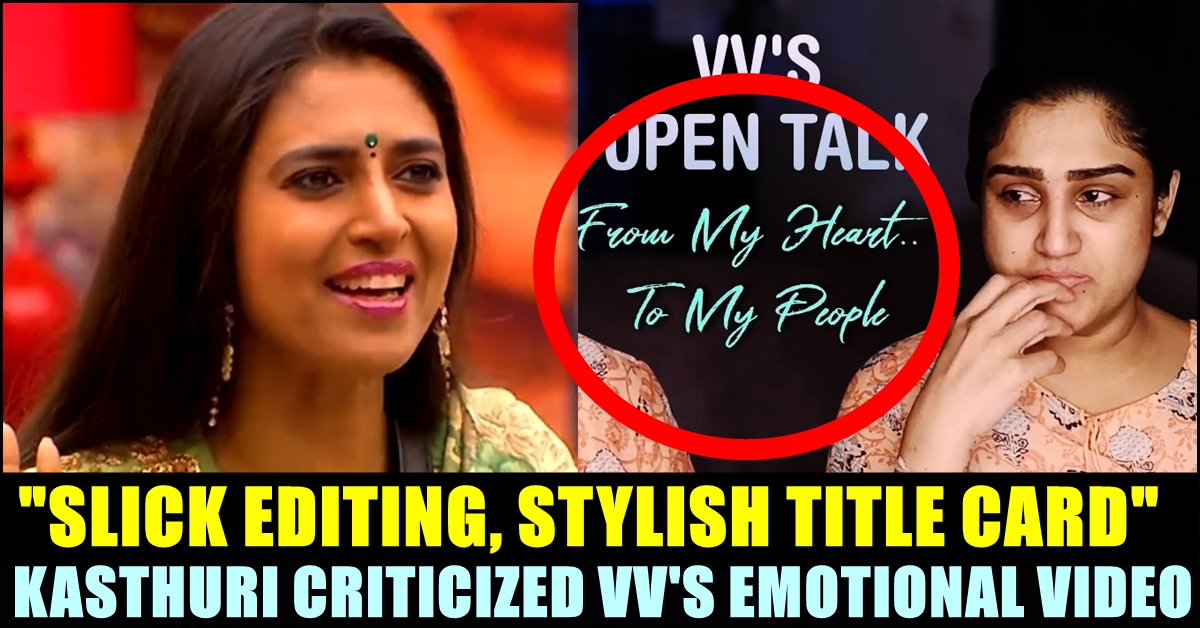 Kasthuri Shankar who participated in video interviews and involved in posting tweets in favour of Elizabeth Helen and tried to reunite her with her husband Peter Paul during the initial stages of Vanitha Vijayakumar’s romantic relationship with Peter Paul, criticized the emotional video uploaded by her Bigg Boss housemate regarding her break up. She said that the video is filled with lies and self compliments. The “Amaithipadai” actress also said that she couldn’t believe Vanitha blaming Elizabeth for all that happened.

The news of Vanitha Vijayakumar and Peter paul’s break up spread like wild fire in social media as soon as the “Chandralekha” actress uploaded her video. One of a twitter user tagged Kasthuri and asked her to state her opinion about the video. She said that she hasn’t watched the video and will express her opinion after watching it.

After an hour, after watching the video, Kasthuri posted a tweet saying that she saw the tearful video. She mocked the video’s thumbnail and editing pattern and wrote that she couldn’t figure how Vanitha is doing business by publicizing her personal life. Kasthuri further accused Vanitha of telling so many lies and criticized her for complimenting herself. “All that is expected But to blame Elizabeth Helen? Unbelievable.” she wrote in her tweet.

When a follower said that it is not a time to blame Vanitha as she became one of the victims of Peter Paul, Kasthuri said Vanitha kept lying even after knowing the truths about Peter Paul. “Neither Peter and Vanitha are victims, they are both users who used everyone including public” her reply tweet read.

You have a kind heart . ஆனால் வெளுத்ததெல்லாம் (பீட்டர் ) பால் அல்ல. Even after coming to know the truth, Vanitha chose to keep lying, support a criminal and abuse innocent victims. Neither Peter and Vanitha are victims, they are both users who used everyone including public

On Tuesday night, Vanitha Vijayakumar uploaded a 50 minute long video narrating the trauma she went through after getting engaged to Peter Paul, an aspiring filmmaker. She released the video after media speculated that Vanitha has beaten Peter Paul and sent him out of her house due to his excessive alcohol consumption. Partly denying the speculation, Vanitha Vijayakumar said that Peter Paul couldn’t leave the habit of smoking cigarettes and drinking alcohol.

The actress said that can feel how Elizabeth could have felt while living with him. She who felt bad for losing a relationship one more time in her life, broke down on air and shed tears while saying that the love she had for Peter Paul is true. Vanitha Vijayakumar made it clear that she never received money from Peter Paul and said that she is the one who managed the expenses all these days.

To my love ty for being who u r to me..u r my best friend and soul connection…love u to the moon and back

“For past one week, he has been drinking and smoking. He asked money to many people to buy alcohol but no one encouraged it. I found him in a drunken state with the help of my costumier. At that time, his brother who was ill, died. I advised him to avoid drinking alcohol as he has two families with four children. As his brother was died, he said that he wants to attend the funeral. I gave him some money and sent him. But he didn’t go to the funeral. He used the money to consume alcohol and attended the funeral in an alcoholic state the next day.” said Vanitha in the video she uploaded in her channel. She ended her video confirming her break up with Peter Paul and said that she has no objection in Elizabeth Helen leading a marriage life with him from now on.

Rajasthan Royals Proudly Shared The Number Of Dot Balls They Bowled Against CSK !!
Old Reply Of Actor Vijay About “Kaththi” Collection Got Resurfaced !!