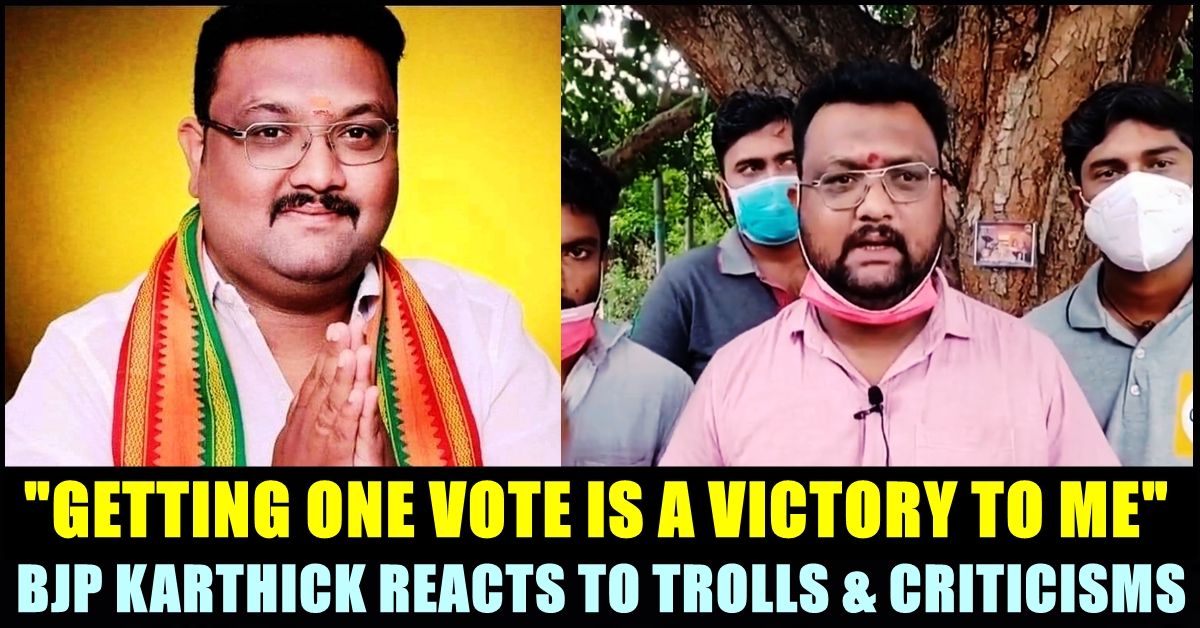 Karthik of BJP party who became a subject to severe trolls in online platforms after receiving one vote in the Tamil nadu local body elections, interacted with media and said that he doesn’t belong to the 9th ward where his family members couldn’t vote for him. He also confessed that he didn’t do proper campaign due to personal reasons and warned online users not to troll him as he is planning to initiate legal complaint against them.

The BJP member contested for the ward member post in the Coimbatore district and lost the election by receiving just one vote, according to a number of reliable sources. Report suggested that his family consists 5 voters but Karthik managed to get only one vote and lost pathetically. The local body election took place at Coimbatore on 9th of October. The election took place for the posts of District Panchayat Ward Member, Village Panchayat Ward Member and Village Municipal Chairman.

Followed by the voting process, the vote counting took place on Tuesday, 12th of October. Results for the by-election of the Kududambalayam’s 9th ward released and BJP’s candidate Karthick managed to get only one vote and lost the election pathetically. Arul Raj who contested on behalf of DMK won the election by receiving 387 votes. Vaithiya lingam of ADMK received 196 votes, says reports.

Reports said that Karthick family consists 5 members including his mother, father, wife and brothers. Including him, he could have got 6 votes and he could be having friends, relatives and cadres who were involved in election campaigns, said reports . But Karthick managed to get only one vote and it created sympathy among the people of Tamil nadu, the report added. Trolls attacking the party are also surfacing in social media platforms.

Now, a video of Karthik himself reacting to the trolls and criticism got surfaced in news channels. “The news about myself getting only one vote are doing rounds in social media platforms and it is absolutely not true. I am living in fourth ward and my family has votes in the same ward. Just for the sake of attempting, I enrolled myself as a candidate in the 9th ward” Karthick said.

“Due to my family situation, I couldn’t go for campaigns. I didn’t even reach public and introduced myself as a candidate. I got one vote and I see it as a victory. Next time, I will stand in fourth ward as a candidate and will work hard to get a huge success. I will add pride to my party as well” Karthick said and went on to react to the social media trolls. “I am planning to start a case by informing POlice station and court against those who troll me in social media platforms” he added.

Girl Married Her Lover’s Father After The Demise Of His Mother !!
Tamil Movie Fans Got Fed Up With This Upcoming Bollywood Film Teaser !! Check Why