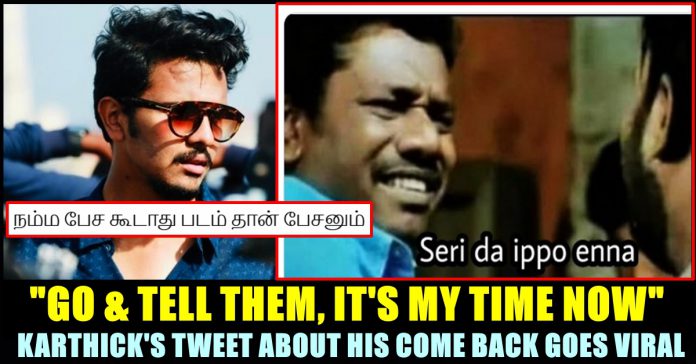 Young and emerging filmmaker Karthik Naren’s tweet about his come back through the upcoming anthology film “Navarasa” had garnered huge attention among the fans of Tamil cinema. The filmmaker who received mixed reviews for his previous film “Mafia”, had posted a screen shot that took from the trailer of the recently released period sport drama “Sarpatta Parambarai” which had actor Arya in the lead role. In the scene, Arya would say that it is the time for him to prove himself in front of everyone. Karthick uploaded the screen shot with an hashtag that said “Navarasa”, a Netflix anthology film in which Karthik made one of the stories.

Among the 9 films, Karthik Naren had directed a film titled “Project Agni” by having Aravind Swami and Prasanna in the lead roles. Music composed by Ron Yathan Yohann, the film also contains Poorna in one of the main roles. The project was produced by veteran filmmaker Mani ratnam under his “Madras Talkies”. Watch the trailer below :

Director Karthick Naren who is just two films old, has already won many hearts of the cinema fans as his first film exceeded its expectations. Though he is struggling to release his second film “Naragasooran” due to financial issues, the filmmaker is now busy in the the pre production work of his third directorial “D-43” in which Dhanush is going to feature in the lead role. On the birthday of Dhanush, the makers have announced that the film’s title is “Maaran”. In the meantime, Karthik made a short film for the production venture of Mani ratnam.

The filmmaker who is just 27 years old, is considered as one of an important director among the new gen filmmakers. On Friday, the filmmaker, in a way of replying to the criticisms he received for his previous film “Mafia”, came up with the screen shot from “Sarpatta”, a Pa. Ranjith directorial.

The post garnered wide reach in no time. With many encouraging the filmmaker for his confidence level level, we could see a number of Twitter users trolling him. A user said that he is eagerly waiting for “Navarasa” to release only to troll Karthick Naren whereas another one said “You will definitely win, Project Agni would be a stepping stone for your success path”

Check out some if the reactions his post received :

Just saying, Linguswamy at Anjaan release time be like: https://t.co/YLelN50qCP