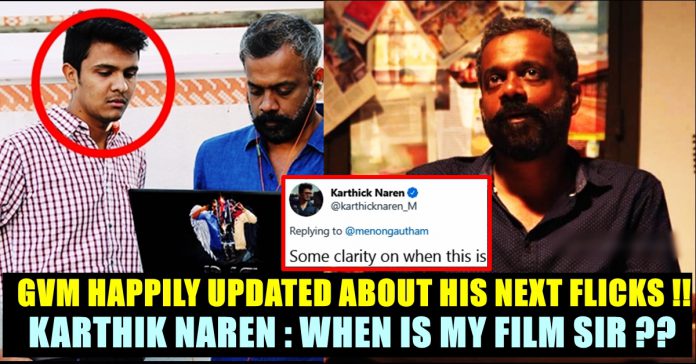 Gautham Menon’s long awaiting films Dhruva Nakshathiran and Enai Nokki Paayum Thotta are going to see the light finally, according to the tweets of the director. Gautham, in his official twitter account said that “Enai Nokki Paayum Thotta” is going to be released on November 29 under the banner of Ishari K Ganesh, Vels film International.

About “Dhruva Nakshathiram”, Gautham said that the film will face a post production for next 60 days and will get released after that. He also shared the experience working with actor Vikram. Here’s his tweet regarding Dhruva Nakshathiram :

And The Season doesn’t end without this film that’s really close to my heart & is hopefully state of the art. Tremendous& positive experience working with THE Chiyaan Vikram!
#DN in post production over the next 60 days and heading towards release. #Johnwillmeetyousoon pic.twitter.com/tVF6IMKw11

The filmmaker also committed another project named as “Joshua Imai Pol Kaaka” by having actor Varun in the lead who is a nephew of Ishari K Ganesh. Gautham thanked Ishari Ganesh for helping him out “to realise his vision”

Thanking @isharikganesh sir for helping me ‘realise my vision’ & for coming on board to release #ENPT.
He saw ENPT & liked it & we’ve agreed to take a journey forward together. More announcements to follow.
JOSHUA is not YOHAN but an equally big idea that needed a big producer

About “Joshua Imai Pol Kaaka”, Gautham appreciated his lead actor Varun for pulling off some stylish action sequences. The film is a complete action flick according to Gautham.

It’s been exciting to film a complete action flick with my hero Varun who’s pulled off some stylish action sequences and is ready to do more. #Joshua Imai pol kaakha..
And this action wouldn’t have been possible without my stunt director Yannick Ben. Thank you team Joshua pic.twitter.com/REa6QjMCcL

As the director made a series of announcements about his upcoming projects, he seems to have forgotten a project named as “Naragasuran” which was earlier announced as his production venture. “Dhuruvangal Pathinaaru” fame Karthik Naren directed the movie and it was supposed to be his second film, trailer of which was also released on August, 2018.

On seeing these tweets of Gautham Menon, Karthick Naren directly asked the “Vettaiyadu Vilayadu” maker about the release of his film. In his tweet Karthick said “Some clarity on when this is gonna see the light of the day will be really helpful sir. And yes, this film is very very close to my heart!”

Some clarity on when this is gonna see the light of the day will be really helpful sir. And yes, this film is very very close to my heart! pic.twitter.com/1eFoEFub3u

It is notable that there was a twitter spat between these two filmmakers regarding the release of “Naragasooran”. GVM vs Karthik Naren On Twitter : GVM Treats Young Filmmakers Like Shit! SHOCKING !! Gautham Menon submitted an explanation to the media at that time as well. Gautham Menon Finally Apologises to Karthik Naren, He Has A Reason For The Apology, Check out!

What do you think on this reply of Karthick ?? Comment your views !!