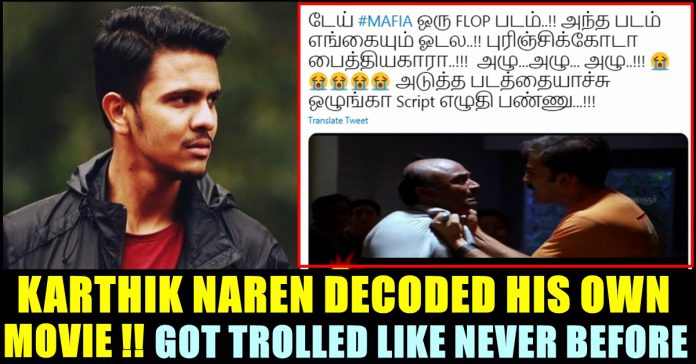 Director Karthick Naren tagged actors Arun Vijay, Prasanna and Lyca productions to let people know about the hidden facts of his recently released movie Mafia. The director who impressed audience with is debut movie “Dhuruvangal Pathinaaru”, became one of the most favourite filmmakers among the emerging filmmakers. Though he is struggling to release his second film “Naragasooran” due to financial issues, the filmmaker successfully released his second film “Mafia” in which he casted Arun Vijay and Prasanna as protagonist and antagonist respectively.

The film which released with highest expectation, miserably failed to impress the audience in big time. Critics also gave mixed reviews for the film which resulted in negative word of mouth. However, many fans lauded the film for the way it is made and for not being a typical masala Tamil film. Now, Karthick who enjoys more than 1 lakh followers in Twitter, decided to let his followers know about the hidden details of his movie “Mafia”.

Check out the thread he posted below :

This post from Karthick Naren instigated severe trolls and criticisms from his own followers. One of his followers said “He wanted to use these reference somehow and ended up making a movie” whereas another one trolled the film by writing “Some interesting details, wish the movie was worthy enough of all this”

Checkout some of the reactions below :

However, Karthick is all set to work on his next film with Dhanush. Tentatively titled as “D43” the announcement was official made by the actor himself through his official twitter account. The film is going to be produced by Sathyajothi films and G.V Prakash joined the crew as music composer. He is also planning to do the sequel of Mafia.

Have you watched Mafia ? Comment your views on these hidden details shared by Karthick !!