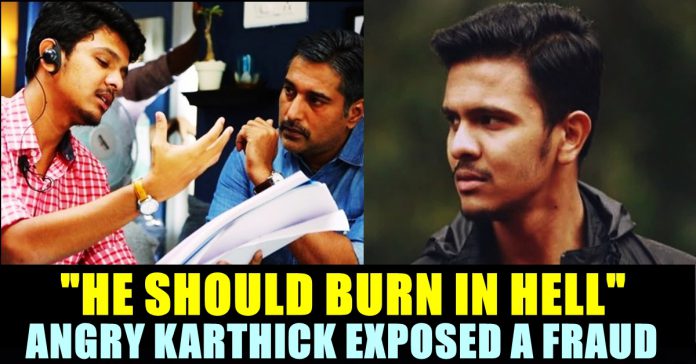 We have seen people who are willing to excel in Cinema industry getting cheated by fake filmmakers and fake production houses. To achieve money and fame in short span of time period, many people invested money by believing the words of fraudsters to attend auditions and to get opportunities to act in films, only to get cheated. Little did they know that no film companies and filmmakers who are truly making a movie would demand money from actors. Actors are meant to get paid for the work they do in film sets. Now, a similar crime has took place and fraudsters impersonated director Karthik Naren to cheat public.

Director Karthick Naren who is just two films old, has already won many hearts of the cinema fans as his first film exceeded its expectations. Though he is struggling to release his second film “Naragasooran” due to financial issues, the filmmaker is now busy in the the pre production work of his third directorial “D-43” in which Dhanush is going to feature in the lead role.

The filmmaker who is just 25 years old, is considered as one of an important director among the new gen filmmakers. Now, Karthik who is pretty much active in social media platforms, came up with an Instagram post warning people not to get cheated by a guy who is impersonating him and luring money.

Karthik said it has been brought to his notice that a guy impersonating him is circulating a fake casting call through a whatsapp number 9777017348 and asking money to people to become a part of the casting crew of his next film. Karthick asked his followers to block and report that number if they get any text. The visibly angered filmmaker wished the person who is involving in this fraud to burn in hell.

Karthick reached this height with sheer hard work which made him to get angry on seeing another person who doesn’t know about his struggle using his name to lure money from public people. He entered film industry after making several short films. The filmmaker who finished his Dhuruvangal Pathinaru, Naragasooran and Mafia in 28, 41, 33 days respectively was lauded by the producers of the above mentioned films for finishing them so quickly.

However his recent film “Mafia” which released with highest expectation, miserably failed to impress the audience in big time. Critics also gave mixed reviews for the film which resulted in negative word of mouth. But many fans lauded the film for the way it is made and for not being a typical masala Tamil film.

As far as D43 is concerned, The film is going to be produced by Sathyajothi films and G.V Prakash joined the crew as music composer. Karthick is currently involved in the pre production of the project with two well known writers of Malayalam film industry named as Sharfu, Shuhas who worked in blockbuster films in Mollywood.