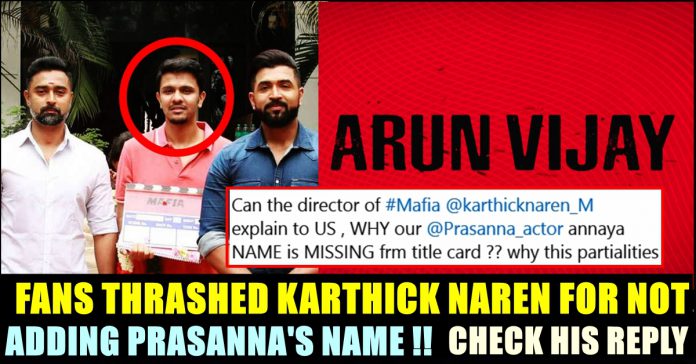 Mafia is an upcoming film produced by Lyca Productions. The film which has actor Arun Vijay, Prasanna and Priya Bhavani Shankar in the lead roles is slated to release soon. The film has created huge expectations among fans as the director has impressed the audience with his debut work. “Mafia” which is said to be a cat and mouse gangster flick.

In the recent video interview Karthick Naren was asked why he didn’t include actor Prasanna’s name in the first teaser of the film. The Mafia teaser which had the narration of actor Arun Vijay and Prasanna about their characters in the film have credits only to Arun Vijay as hero. Prasanna who has been working in Tamil film industry since 2002 has a separate fan base for his works.

Check out some of the reactions of the fans who are worried about the absence of Prasanna’s name in the teaser :

@Prasanna_actor Sir very disappointed tat ur name is not held in Mafia teaser…. Ur such a deserving actor…. Lov u sir…

#Mafia teaser was good. But I had a little disappointment in title card. Because Prasanna’s name is missing.

Can the director of #Mafia @karthicknaren_M
explain to US , WHY our @Prasanna_actor annaya NAME is MISSING frm title card ?? why this partialities sir ?? u evn can add @arunvijayno1 Vs Prasanna in title card tho?
pls give some respect to great actor like Prasanna annaya too 🙏 pic.twitter.com/YIfX8xr5l8

@karthicknaren_M watched #MafiaTeaser and it was very good. Looks like Arun Vijay and Prasanna have equal importance in the story. Wonder why Prasanna’s name was not included in the teaser. @arunvijayno1 @Prasanna_actor #Mafia

Now, in a way of giving clarification to these reactions from fans, Karthick Naren has gave a clarification. In the interview with Galatta, Karthick said that this issue must be addressed. Karthick said that Arun Vijay had no problem in approaching Prasanna for the role. “I have no restrictions like such things mentioned by the fans. That is why we gave equal weightage to both the characters in the teaser.” said Karthick who went on to add that it is because of a technical reason.

“Our music composer gave us a composition and we edited the teaser according to it. If we had room to add Prasanna’s name we would have done it. Otherwise we don’t have any restriction in adding his name” said Karthick Naren who assured that they have mutual respect for each other.

What do you think on this clarification gave by Karthick ?? Comment your views below !!

RJ Balaji Reveals The Moment When He Felt Ashamed Of Himself !! Watch Video !!