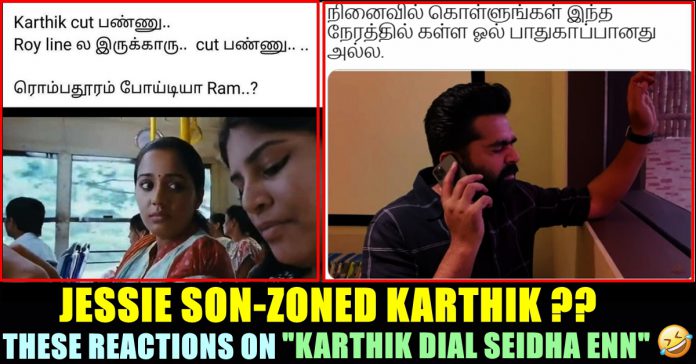 Gautham Vasudev Menon who was struggling to see a theatrical release for more than 3 long years in his filmmaking career, made a short film and released it with ease in this lockdown period which proves the ability of the filmmaker. He made the trollers and his criticizers to realize that not his creativity but the financial crisis he faced stopped him to deliver a product between November 2016 and November 2019. After “Achcham Enbathu Madamayada”, Gautham took 3 years to release his “Enai Nokki Paayum Thotta” which went on floors before AYM. The filmmaker directed a web series inbetween based on former chief minister Jayalalitha’s biography and now surprised Tamil cinema audience with this short film “Karthick Dial Seidha Enn” which is a sequel of his 2010 blockbuster “Vinnai Thaandi Varuvaaya”.

Gautham is one of a very few filmmakers of Kollywood who enjoys a fan base among Tamil cinema audience. His writing and the way he portrays characters which belongs to upper middle class family, garnered a special attention among them. Known for his stylish way of making, Gautham Menon has introduced new way of narrative structure to the audience of Tamil cinema as well. He influenced many youngsters of Tamilnadu to pursue their career and their girl through his films. Now, in this 12 minute long short film Gautham goes on to depict the writer’s block faced by Karthick, a filmmaker by profession.

To help himself to write his script with a peace of mind, Karthick calls Jessie, a mother of two children and seeks her help. He asks her to love him like she did before which helped him to write his debut film “Jessie”. She who hesitates initially goes on to talk her heart out to her ex-boyfriend. Many of the things that worries Karthick in this “Karthick Dial Seidha Enn” seems to be the problems faced by GVM himself in his real life. Starting from writer’s block to theatres shut down, the resemblance of the filmmaker’s real life is very much evident in his short film. After having this conversation with Jessie, Karthick finishes writing a script on Kamal-Kadhambari’s love which is Gautham’s one of the next projects.

Watch the short film below :

Simbu and Trisha shot their portions in their respective houses and A.R Rahman composed music for the film. As soon as getting released, “Karthick Dial Seidha Enn” went extremely viral among the fans, thank for the impact made by “Vinnai Thaandi Varuvaya”. In few minutes, it is going to hit 1 million views in GVM’s official youtube channel and the film is being shared by many other youtube channels as well.

Many write ups and breakdowns are emerging regarding the film in Internet. Fans of VTV are celebrating the short film in their own way. Fans of actor Simbu couldn’t keep themselves calm as they are seeing their idol appearing on screen after more than 1 year. However, reactions of common audience and meme creators for this 12 minute short has conquered the social media platforms for past 12 hours. The film indeed introduced a new term “Son-zoned” among the netizens as Jessie would say that she is seeing Karthik as her third son. Hashtags such as “Karthik Dial Seidha Enn”, “Jessie” are trending in the micro blogging social media site since the film released.

Karthik: I need your love

What she said: There's no hope for you in that area

Jessie : There is no hope for you in that area

Comment your views on this venture of the successful trio !!

Previous articleMia Khalifa Advised To Young Girl Who Wished To Become Like Her !!
Next articleMckenzie’s Tweet About Kamal Haasan Is Trending !!