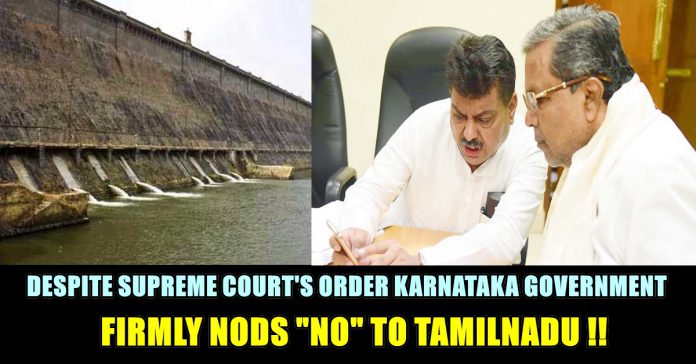 Karnataka Government Firmly Says That They Cannot Provide Cauvery Water To Tamilnadu : Check Out What The Water Source Minister Said !!

The Supreme Court on Thursday, 3 May told the Karnataka government to show its bona fides by releasing at least 2 tmcft of Cauvery water to Tamil Nadu by Tuesday 8 May and ordered the Centre to file an affidavit detailing steps taken to frame the scheme on inter-state sharing of river water in accordance with the SC’s 16 February judgment. “Release 4 tmcft water, at least 2 tmcft by Tuesday. Come with a positive attitude on Tuesday or face consequences,” a bench of CJI Dipak Misra and Justices AM Khanwilkar and DY Chandrachud warned Karnataka which goes to polls on 12 May. However, the SC order merely said the counsel would take instructions from the state government.

In response to the Supreme Court’s warning, Karnataka said it’s not in a position to release additional water to Tamil Nadu.

“There is a total of nine tmc water in all the four reservoirs coming under the Cauvery basin. 9 tmc water is not enough for our drinking needs and crops. We have shortage,” water resources minister MB Patil said. In a video message shared with media today, he said “In this circumstance we cannot obey today’s Supreme Court’s order, as we don’t have water. We will inform the supreme court about the availability of water currently and our needs.”

“Even if we want to release, we don’t have water. We have shortage,” he added.

During the hearing today, the court first asked Karnataka to release 4 tmcft water by May 8, then asked it to release 2 tmcft water and at the end, the top court ordered the state to apprise the bench “as to how much water can be released.” Stating that he was in touch with the legal team, the minister said “We will bring to the notice of the court that its order cannot be implemented. We don’t have water. ”

The Centre was today rapped by the apex court for failing to finalise the draft Cauvery management scheme.

It was also flayed by Tamil Nadu for its alleged “partisan” attitude to favour Karnataka by citing the poll campaign in that state for the delay.
Previous articleJust In : A Little Fan Makes His Way To The CSK Dugout Just To Touch Dhoni’s Feet !!
Next articleTN Students Forced to Travel 2751 KM To Write NEET Exam : Check What The Abandoned Students Has To Say !!

Woman Tennis Player Adjusted Her Top Inside The Court !! Here’s What Fans Reacted !!

A lot is being said and discussed about gender equality but one more incident has taken place which makes us believe that implementing gender...