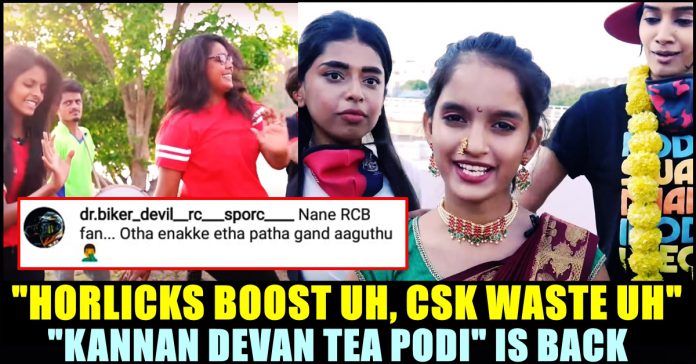 A new set of girls dancing for a song which is similar to last year sensation “Kannan Devan Tea Podi” has got released in social media platforms. The girls who could be seen wearing the jersey of Royal Challengers Bangalore team, trolled CSK by singing “Horlicks uh Boostu, CSK Waste uh” which is similar to last year’s “Kannan Devan Tea Podi, CSK Pudi Pudi” which became a troll material among the fans of team CSK.

The girls, while celebrating the victory of RCB against CSK in the first league they played in the 13th edition of IPL, uploaded a video trolling the yellow team whom they consider as their rivals. “Pudi Pudi” was used by them in their video song which received 2 million plus views in youtube.

On 10th of October 2020, Chennai Super kings lost to Royal challengers Bangalore by 37 runs in the 25th league match of IPL 2020 and Troll video was uploaded by the fan girls on the very next day. The song phrase “Kannan Devan Tea Podi, CSK Pudi Pudi” went insanely viral among the netizens as soon as the video released. In the second league Chennai defeated Bangalore and spoiled their party of topping the table to play in the decider.

Now, as the next season is progressing, a similar video got released by a set of girls in Internet. In the video, the four girls, along with drums players, could be seen singing and dancing a song praising RCB team and its players. They also trolled CSK team in their song by singing “Horlicks uh Boost uh CSK Waste uh”

As soon as the video got surfaced in Internet, fans of CSK rolled up their sleeves to troll them back. Check out some of the reactions below :

Check out the most famous “Kannan Devan Tea podi” song below :

Abhirami Mother’s Opinion On Her Daughter Falling In Love On The Very First Day !! WATCH !!

Bigg Boss Tamil season 3, hosted by Ulaganayagan Kamal Haasan’s grand opening aired on Sunday and the first day of the show has been...