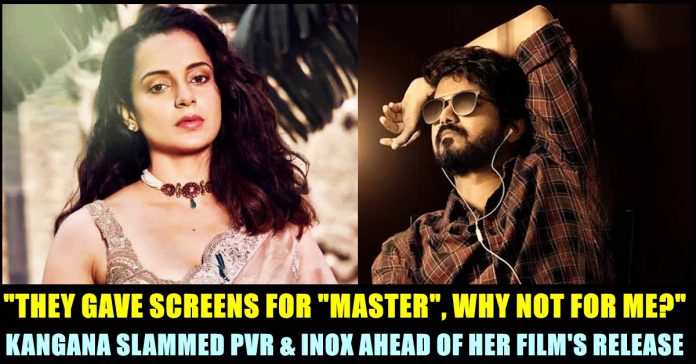 After a number of multiplex theatres decided not to screen “Thalaivi” in their premises, Bollywood actress Kangana Ranaut who played lead in the film got upset and vented her emotions out through her official Instagram account. It has been reported that three national multiple chains seemingly decided to not accommodate the film which is releasing in theatres on 10th of September. Kangana vented her emotions out saying that big heroes movies such as “Master” and Radhe” were screened in multiplexes but refusing to release her film “Thalaivi” which has 4 weeks window. She also cited it as a reason for the non-emergence of female super stars.

Reacting to the decision, Kangana Ranaut took to her Instagram handle and shared a series of stories conveying a message to the multiplex owners. “No films are choosing, very few and very brave like my producers @vishnuinduri @shaaileshrsingh are compromising on huge profits and letting go off exclusive streaming options only for the love of cinema .. in these times we must support each other and not bully or arm twist, it’s our fundamental right to recover the cost of our film which we did, we may have two weeks window for Hindi version but for south we have four weeks window yet multiplexes ganging up on us and stopping Our release there as well… This is unfair and cruel in these testing times when major territories like Maharashtra are also shut … Please let’s help each other in order to save theatres” Kangana said in her first story.

“Multiplexes have different rules when it comes to big heroes films, they released Radhe simultaneously on ott and theatres. They have released Master with 2 weeks window, releasing Hollywood movies with simultaneous OTT release in US, but refusing to screen even the South of THALAIVIl which have a 4 weeks window. @pvrcinemas_official @inoxmovies the system makes sure that no woman rises and then complains why don’t we have women super stars bringing audiences to theatre on her own like men do…” her next story read.

“PVR cinemas and Inox movies says they are on ventilator but even then bullying harassment and
ganging up seems their top most priority. Simply explains why they are in this state in the first place .. Hope better sense prevails… content makers have too many options to showcase their work but we need to multiplexes support to save them …” Kangana said through her next story.

Report suggests that the reason behind the decision of multiplexes is that the chain insists on a minimum exclusive theatrical window of at least four weeks amid the COVID 19 outbreak. The same scheme is currently being followed for other films such as Akshay Kumar’s “Bell Bottom”, Amitabh Bhachchan’s “Chehre” which released on theatres.

Makers of “Thalaivi” were planning for an OTT release initially and accepted to the conditions of theatre owners after the lockdown restrictions on theatres were removed by the government. Currently, theatres are allowed to operate with 50% occupancy across the country.

Previous article“We Lied To The Security Of WWE To Enter” – Youths After Going Viral With Their Tamil Placard
Next article#JusticeForCameron Is Trending After The Tiktoker Got Imprisoned!!

A shocking Instagram post from a girl named Shruthi Prakash about the trauma she faced while travelling from Bangalore to Chennai through Red Bus...

Kalyan Jewellers In Trouble After Their Latest Ad !! Apologized For Hurting Sentiments !!

A clip from an interview of "Cooku with Comali" fame Ashwin, Shivangi, Shakthi talking about actors Vijay and Ajith was uploaded by a fan...