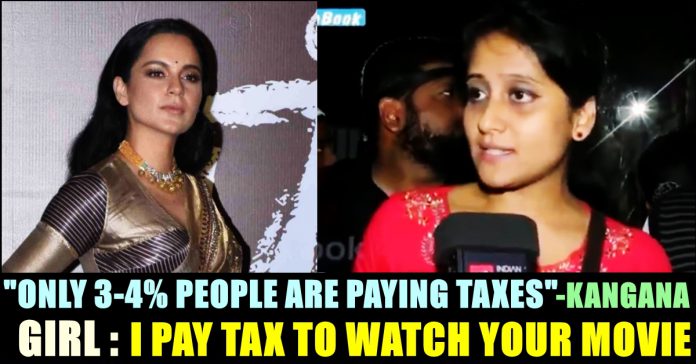 So far, It has been reported that at least 18 people died in the protest conducted to oppose CAB act and thousands of people were arrested. In Tamilnadu, except ADMK, almost every leading parties are opposing the event. Meanwhile, actress Kangana Ranaut who is a popular actress across the country has registered her opinion regarding the same.

The actress, in her film funcion said “When you protest, the first thing that’s important is that you don’t turn violent. In our population, only 3-4% ppl pay tax, others are actually dependent on them. So, who gives you the right to burn buses, trains & to create ruckus in the country?” she said who further added “That should be looked into because one bus costs a lot. A bus costs around 70-80 lakhs and it’s not a small amount. And the condition of this country is such that there are so many who are dying of malnutrition, so it’s not correct for people to instigate violence in the name of democracy. This is my personal opinion.”

This comment from her created massive outrage across the country where many started schooling the actress how tax paying works in our country. A young woman who is protesting against the government since very long time has made a strong statement against the opinion of Kangana.

The young brave woman asked Prime Minister and Home minister to sit and talk first before making a statement to people. “It is very confusing and you people are confusing the country.” she said to the media. Then she slammed Tejaswi Surya for making comments in a bad taste against the protesters. “I tell you one thing, come and debate with me. It is an open challenge to you” she said on the camera.

While talking about Kangana Ranaut’s comment, the protester said “First understand the tax system of India. We pay taxes even to buy the ticket to watch your movie. And even for these candles we pay taxes.” she said. The furious youngster was visibly dejected due to the fact that 18 people were lost their lives in Uttar Pradesh while protesting against the government.

This brave young girl just called out Modi Shah for their lies, challenged Tejaswi Surya to an open debate and gave tax lessons to Kangana Ranaut..

The brave youth of India see through BJP's #JhootJhootJhoot and are challenging them head on! pic.twitter.com/7ny3r11aBR@IYC

This video goes viral across the country with various reactions in a way of supporting her. Many awed at her boldness and the way she stating her opinions with clarity. Comment your views on this counter replies of the protester !!