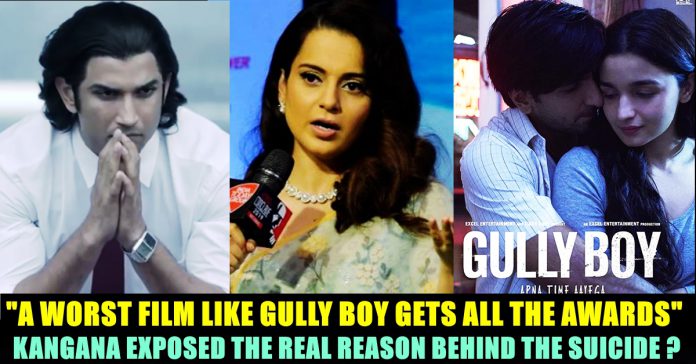 While every other celebrity of Bollywood came up with condolence message to mourn for the demise of Sushant Singh Rajput, actress Kangana Ranaut who is known for voicing out for issues that are taking place in Bollywood, came up with a series of accusations against the entire Bollywood industry for the demise of the young actor. She termed the North indian film industry as “Bollywood Mafia” and blamed the prominent members of it for the 34 year old’s death.

A 2 odd minute video of the actress talking about the issue was released in Instagram by Team Kangana Ranaut handle. Kangana said Sushant Singh Rajput’s death left us all devastated and expressed her disagreement on people looking for parallel narrative even in this matter. She didn’t accept the allegation of many people who said that Sushant had a weak mind and he killed himself due to depression. “A guy who has a scholarship from Stanford… he is a rank holder of his engineering entrance, how can his mind be weak?” Kangana asked.

Kangana said that Sushant was literally begging people to watch his films through his last posts. She said Sushant believed that he will be thrown out of the industry soon because he didn’t have a Godfather like other young actors. She pointed out a recent interview of Sushant where he said that he feels like a left over in Bollywood as it doesn’t making him as its own. “So doesn’t this incident have any other reason ??” the actress questioned.

Kangana, further went on to blamed how the industry ignored him by not acknowledging his works in his films. “He didn’t get any acknowledgement for his debut film Kai Po che or MS Dhoni or Kedarnath or Chichchore. A bad film like gully boy gets all the awards, Chichchore is a best film by the best director, but his film gets no recognition” she said in her video.

The actress said that she doesn’t want anything from the mainstream industry. “We don’t need anything from you. We don’t need your films but the films we do on our home, why don’t you acknowledge us for that ? The films I myself direct, why do you declare those superhit films as flops ? Why have you slammed six cases on me? Why did you want to put six cases on me and wanted me in Jail ?” Kangana blasted.

She also blamed a section of journalists who projected Sushant as a psychotic, that he is neurotic and he is an addict. “But you find Sanjay Dutt’s addiction very cute ??” the actress asked in her video and asked whether Sushant’s was a suicide or a planned murder.

Watch the video of the actress below :

It is important to give talent their due. And if celebrities are struggling with personal and mental health issues, the media should try and emphasize with them, rather than making it difficult for them!

“Sushant’s mistake was he believed in them. They told him that he was worthless, and he believed that. He didn’t remember what his mother told him. Those people want that they write history, and in it, they write that Sushant was of a weak mind. They will not say what is the truth. So we need to decide who will write history. We will decide that.” the actress said in her video.

As soon as the video of Kangana released, twitter got divided into two. Hashtag on “Nepotism In Bollywood”, “Nepotism” were trending in the micro blogging social media site. Apart from Kangana, many other actors indirectly exposed that there is something going on wrong in the Bollywood industry among the high profile actors, producers and directors. Comment your views on these statements of the actor !!

Previous articlePriyanka Chopra Tried To Prove Her “Intelligence” While Mourning For Sushant ??
Next articleSHOCKING : Followed By Sushant, His Sister-In-Law Passed Away !!

As every other cricket player, Rishabh Pant also came up with a message to console Indian fans for the loss of India against New...