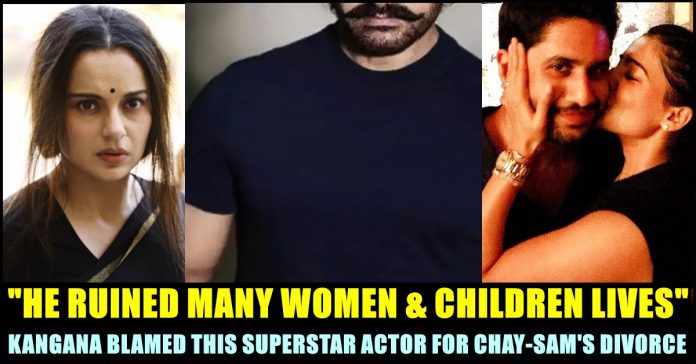 Bollywood actress Kangana Ranaut who is known for making controversial statements, accused actor Aamir Khan for the separation of Telugu actor Naga Chaithanya and South Indian actress Samantha Ruth Prabhu. She said that the separation between the married couple took place after the “Manam” actor came in contact with the Bollywood actor while acting in the Hollywood remake “Forrest Gump”. Through her story, she termed Aamir Khan as “divorce expert”. She said that the fault is always on a man whenever a divorce takes place.

“The south actor who suddenly divorced his wife was married for 4 years and in a relationship with her for more than a decade recently came in contact with with a Bollywood superstar who is also
known as Bollywood divorce expert…. Has ruined many women and children lives is now his guiding light and agony aunt .. so it all went smoothly. This is not a blind item we all know who I am talking about” she said in her first story, screen shot of which is going viral in social media platforms.

Check out the screen shot of her first story below :

She said that the God has made humans and added that a man is to blamed for a divorce by nature. “Primitively scientifically he is a hunter and she is a nurturer. Stop being kind to these brats who change women like clothes and then claim to be their best friends … yes out of hundred yes one woman can be wrong but that’s the ratio… Shame on these brats who get encouragement from the media and fans. they hail them and judge the woman.. Divorce Culture Is growing like never before” she said throgh her second story.

Here’s the screen shot of her second story :

It is notable that Aamir Khan, recently announced about his separation with his second wife of 15 years Kiran rao. They tow claimed that they will remain friends and even gave a joint interview after ending their relationship. Earlier, Amir was married to Reena Dutta.

Previous articleFormer Bigg Boss Contestants Reacted To The Inaugural Episode Of Season 5 !!
Next articleOld Post Of Samantha About Siddharth Getting Spammed After Her Divorce !!

Bigg Boss is the most talked about reality television show among Tamil audience since the inaugural episode of third season. Starting from Abhirami's love...