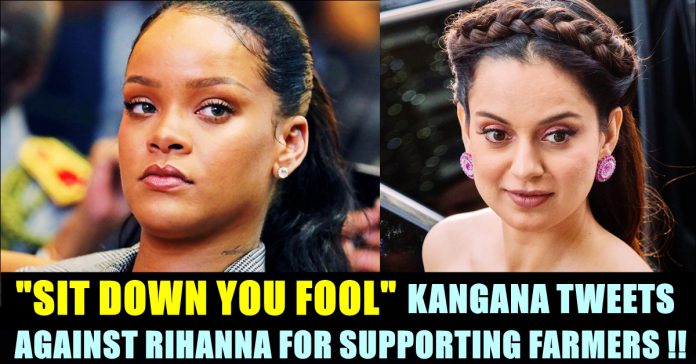 Bollywood actress Kangana Ranaut taking on Bollywood celebrities is something we all have witnessed but attacking a International pop sensation and multi-Grammy award winner for supporting Indian farmers ? Majority number of Internet users who belong to India started reacting to the reply tweet of Kangana to condemn her and she is trending in the micro blogging social media site.

On Tuesday, The pop-superstar extended her supportive hand to the ongoing farmers protest in India. “why aren’t we talking about this?! #FarmersProtest” Rihanna asked while sharing an article regarding it.

why aren’t we talking about this?! #FarmersProtest https://t.co/obmIlXhK9S

This tweet from Rihanna who is enjoying 101 million followers in twitter, garnered a large number of reactions from International celebrities, politicians and activists from across the world and brought added focus to the movement.

Soon after Rihanna’s tweet started trending in India and all around the world, Bollywood actress Kangana Ranaut who is known among Tamil audience for acting in “Dhaam Dhoom”, uploaded a tweet slamming Rihanna for supporting the farmers. She who called Rihanna a “fool”, termed “farmers” as “terrorists” in her tweet.

“No one is talking about it because they are not farmers they are terrorists who are trying to divide India, so that China can take over our vulnerable broken nation and make it a Chinese colony much like USA… Sit down you fool, we are not selling our nation like you dummies.” read the reply tweet of Rihanna.

No one is talking about it because they are not farmers they are terrorists who are trying to divide India, so that China can take over our vulnerable broken nation and make it a Chinese colony much like USA…
Sit down you fool, we are not selling our nation like you dummies. https://t.co/OIAD5Pa61a

This tweet, indeed “shook” the users of twitter who apologized to Rihanna for the remark made by Kangana and others created memes trolling the Hindi actress. Many of them pointed out how Kangana expressed her admiration towards Rihanna in the past well.

Rihanna who had no Idea who Kangana is. pic.twitter.com/pPHm5BNjLQ

Kangana Ranaut is the real anti national for having the stupid cheek to call Indian farmers “terrorists”. Ms Ranaut is a public disgrace & study of ignorance

This will go down as one of the biggest take downs of 21st century! 😂 @Advaidism @KanganaTeam #FarmersProtest #Rihanna pic.twitter.com/zn7YwKQ6Fh

O bhaii! 🤣 Kangana getting humiliated by everyone now. #FarmersProtest ✊🏻 pic.twitter.com/hc4NXiHKaA

When life gives you na….be a Rihanna, not Kangana.#FarmersProtest#KanganaRanaut
,#Rihanna

However, despite of the trolls, kangana seems to have no stopping. She uploaded another couple of tweets saying that Rihanna is just a singer. “what is so special about her, well… she can shake her bum cheeks and expose her ass crack right in to the camera lens while singing..ya that’s all. Nothing else.” she said in her most recent tweet.

Post the release of "Vendhu Thaninthathu Kaadu", makers of the film conducted a "Thanksgiving" meet. In the event, Simbu addressed about the people who...

"Sarpatta Parambarai" protagonist Arya and Santhosh Narayan who composed music for the film reacted to the viral "Vaathiyare" memes in a hilarious way. Sana...

Actor Vijay who is being celebrated as a demi-god by his fans today, has recently made his fans go gaga over a single Twitter...