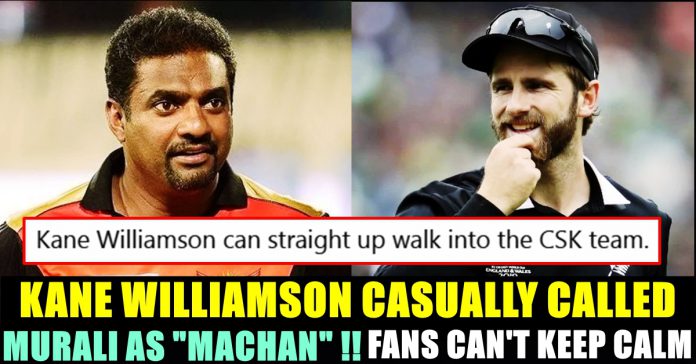 A month old video of Kane Williamson of New zealand cricket team calling legendary spinner Muttiah Muralitharan as “Machan” had resurfaced in Internet and is going viral among the Tamil speaking cricket fans. Throughout the IPL tournament, Dinesh Karthik kept Tamil fans engaging through his Tamil one liners to Varun Chakravarthy. Now, in the same season, During the net session, While Muttiah Muralitharan was coaching the bowlers of Sunrisers Hyderabad, Kane Williamson could be seen calling Muralitharan as “Machan”, a local Tamil word that is used widely between friends.

Kane Williamson is currently busy representing his national team for the test matches against West Indies. He recently smashed a double century against the Jason holder led team. The black caps declared their first innings after scoring 519 runs and Captain Williamson recorded a career best 251. This is the third double century of Williamson in his test career. The double century featured 34 fours and 2 sixes and the 30 year old improved his test average through this terrific innings.

In the IPL tournament, Williamson represented sunrisers Hyderabad under David Warner’s captaincy. Unfortunately his team got eliminated in the eliminator match which took place between Delhi capitals and Sunrisers Hyderabad. However, the cricketer had a good season with the bat. In the 12 matches he played, Williamson scored 317 runs with an average of 45. 28.Having an highest score of 67, Kane scored three half centuries.

Muttiah Muralitharan, former Sri lankan player is currently working as a bowling coach for the team. In a video uploaded by the official social media handles of the team, Muttiah could be seen coaching the young bowlers of the team on the variations, line, length and pace. Muttiah also organises the net session for the bowling squad of the orange team which includes Nadeem, Natarajan, Sanjay, Rashid, Basil, Khaleel, Siddharth etc. The former cricketer communicates with Natarajan in Tamil language and saus “Inthaa” (take it) while handing over the ball to him to bowl in the nets.

While he was teaching the spinners, Kane who was wearing the pads, make his presence in the spot and says “The art of spin bowling machan” to Muttiah Muralitharan. And then he bowls the ball in the pretext of teaching the juniors. “Good for the off spinner” he says after bowling.

Many Tamil speaking cricket fans got excited on hearing Williamson saying “Machan” to call “Muralitharan” as it is a world that is so much connected to them. For a very long time, fans of CSK team has been expressing their wish of bagging Williamson for CSK team. After seeing this video, they got extremely happy and a fan wrote “Kane Williamson can straight up walk into the CSK team.” to express his emotion.

Kane Williamson can straight up walk into the CSK team.

He's from New Zealand…
He's Calm and Cool all the Time…
He's So Genuine…
And now he can Speak Tamil…@ChennaiIPL is there any reason to not pick him in Auction??….

Enough da. Are u seeing this @ChennaiIPL .? All the more reason to buy him now. 😅😍

Previous article“They Already Have A Plan” – Former Bigg Boss Participant !! WATCH
Next articleJUST IN : This Contestant Got Evicted From The Show ??