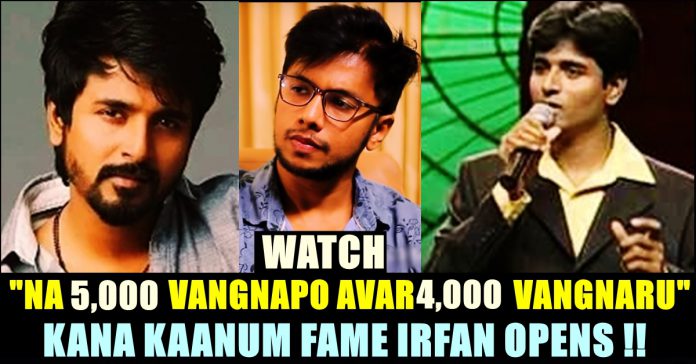 Irfan popularly known as “Kana Kaanum Kalangal” Irfan debuted to Tamil film industry through a film named as “Sundattam” based on carrom gambling. The actor was next seen in a village drama titled Pongi Ezhu Manohara which got released in February 2015. Recently he appeared in “Rajavukku Check” in which Cheran played the role of a protagonist.

Kana Kaanum Kaalangal is one of the most favourite show for the kids who were born in the early 90’s. The television serial which focused on the students of school became popular among the audience of Television. It topped the TRP ratings during its streaming time. Many actors of Kollywood such as Paandi, Bigg Boss star Kavin, “Sembaruthi” serial hero Karthik, Kollywood hero Rio, “Maanagaram” fame Sree started their career in “Kanaa Kaanum Kalangal”. Irfan also started his acting career through “Kana Kaanum Kalangal”. Now he has appeared in an interaction with Behindwoods in which he shared about many of experiences throughout his acting journey.

In the interaction, Irfan shared about how he got selected to play the lead role in KKK and also about the opportunities he missed in Tamil film industry. At one point, he even shared how actors like Sree and Sivakarthikeyan who worked along with him in Vijay Television made their way to the film industry and excelling in it in their own way.

About Sree, Irfan said that he asked him how to act for a wide shot during KKK times. He even wondered on how Sree improved himself as an actor and lauded his performance in Vazhakku Enn 18/9. About Sivakarthikeyan, Irfan shared about an incident that happened long back. “When he was performing in Kalakka povathu Yaaru, I was performing in Jodi No.1. We went to coimbatore and Ramya hosted the show we performed.” Irfan started narrating the incident.

“At that time, I was popularly known for performing in Jodi.No.1 among people and he was popular for his performance in Kalakka Povathu Yaaru. That was the time when Santhanam left Vijay TV to have a career in film industry. After finishing our respective performances, I got Rs.5,000 as my payment and Sivakarthikeyan brother got Rs.4,000 as payment for his performance. At that time, I asked myself when I am going to receive payment in crores. Sivakarthikeyan brother has achieved it but I am still growing to reach the height” said Irfan in the interaction.

Apart from this, Irfan shared about many incidents including about the projects he missed in Tamil film industry in his earlier days. Sivakarthikeyan who is now busy acting in films also started a production house on his own. Let us wish Irfan to get a successful career with handful of projects in future !!

Previous articleUnexpected Message From Vijay Devarakonda For His Fans !!
Next articleVikram Acted In “Adhithya Varma” ?? WATCH