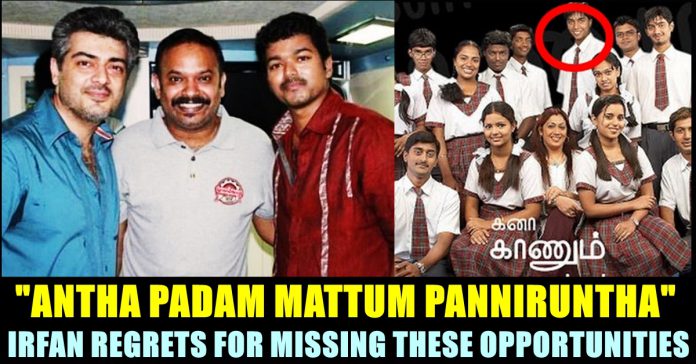 In a recent interaction with a popular youtube channel, Kanaa Kaanum Kaalangal fame Irfan expressed his regression for missing the opportunities in the initial period of his acting career. Irfan popularly known as “Kana Kaanum Kalangal” Irfan debuted to Tamil film industry through a film titled as “Sundattam” based on carrom gambling. The actor was next seen in a village drama titled Pongi Ezhu Manohara which got released in February 2015. Recently he appeared in “Rajavukku Check” in which Cheran played the role of a protagonist.

In the interview Irfan shared about many of his experiences throughout his acting career and also revealed us the projects which he missed to do in the past. The actor said that his career would have been entirely different if he did those projects. When he was asked what he would change in his career if he gets a chance to travel in time machine, Irfan said that he would change his career.

“After performing in Jodi no.1, I missed to do 4 films which would have changed the path of my career.” said Irfan who went on to add that he still regrets missing the opportunity to act in the film “Angadi Theru”. “After committing in the film, I reduced my weight and tanned a bit. Vasantha Balan sir was very happy and everyone was happy. Mahesh who refused to do the film initially due to his family, accepted to act in it at the last minute.” said Irfan about missing the chance.

Further Irfan revealed that he was supposed to do the role of Navdeep in Ajithkumar’s “Eagan” and said that also missed to act in Venkat Prabhu’s Saroja. “Likewise I missed 3, 4 more movies at that time. I don’t ask for too much. If i get a chance to use time travel machine, I would Angadi Theru to happen” said Irfan in his interview.

Apart from this, Irfan shared about many other things including his friendship with actor Simbu and the moments he shared with Sivakarthikeyan during their Vijay TV times. (Also read : Kana Kaanum Kalangal Irfan Shares About Sivakarthikeyan !! WATCH)

Irfan rose to fame through Kana Kaanum Kaalangal which is one of the most favourite show for the kids who were born in the early 90’s. The television serial which focused on the students of school became popular among the audience of Television. It topped the TRP ratings during its streaming time. Many actors of Kollywood such as Paandi, Bigg Boss star Kavin, “Sembaruthi” serial hero Karthik, Kollywood hero Rio, “Maanagaram” fame Sree started their career in “Kanaa Kaanum Kalangal”. Irfan also started his acting career through “Kana Kaanum Kalangal”.

Virat Kohli and MS Dhoni are two of the cricketers who are enjoying a large number of fan followers. We have witnessed incidents where...

To Solve Social Media Problems, Rangaraj Pandey Came Up With A Solution !! Got Thrashed By His Own Followers !!

Popular Journalist and Former Thanthi Tv Chief news editor came up with a tweet yesterday which received heavy trolls and hatred. His idea of regularizing...