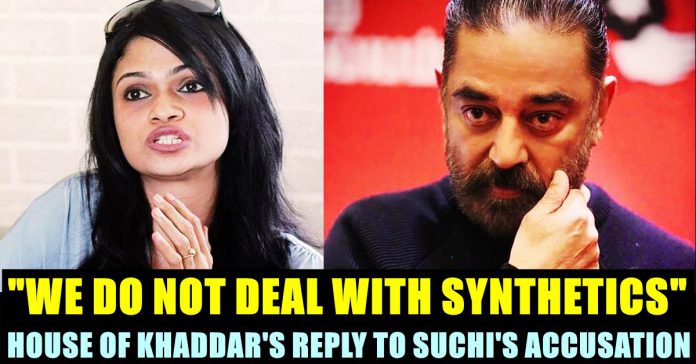 After seeing Suchithra’s post about the attire she was provided during the finals of Bigg Boss season four, a follower went on to question the firm through Instagram. Kamal Haasan’s “House of Khaddar” said that they gave her the shirt with regards to her own interest and confirmed that they do not deal with synthetic fabrics.

Kamal provided the attires that were made in Khadi to the contestants of the Bigg Boss show which included the five finalists. He asked them to wear it for the special occasion while launching his initiative “House of Khaddar”. Playback singer and dubbing artist Suchi who participated in the show as a contestant, came up with a social media post slamming Kamal and his “House of Khadar” initiative.

Though she deleted her post now, the screenshot of it are doing rounds in social media platforms. In the post Suchi could be seen accusing the firm by saying that they gave her a fake “Khadi”. After writing a poem about her experience in the Bigg Boss show, Suchithra mentioned that the puppet is Kamal Haasan.

She said that she was asked to pose a synthetic shirt as Khadi during the finals. “Puppet Master = #kamal and his stupid House of
Whatever nonsense brand (such pooooooor taste). I know l was given a synthetic shirt and told to display it as Khadi (owning up )…what a disgusting human being #emperorsnewclothes much Mr KH? #worstucharacters oru ruba kooda selav panla.. theendhu pochu kanakku ramar wastu…he’s a helpless man- not a God.” Suchi’s caption for the post read.

Here’s the screenshots of her poem and caption :

Meanwhile, “House Of Khaddar” launched their official Instagram account and garnered 10 k followers in no time. They uploaded a number of posts captured during the finals of Bigg Boss season four.

A post shared by KH House of Khaddar (@khhouseofkhaddar)

An Instagram user named Hari Priya, on seeing the post of Suchithra, commented on the post of House of Khaddar’s official Instagram account and questioned about Suchithra’s allegation. “Got to see the post of BB Suchita, she mentioned that itseems to be fake ? She was given a synthetic dress during the finale, and asked to pose as if it’s khaddar ?” she asked.

Replying to this comment, “House of Khaddar” replied saying that Suchithra is the one who requested for “H&M” shirt. They also said that the fabric of the pant was made from the material which was bought from the weavers and confirmed they do not deal with synthetics. “The fabric of the pants made for her were bought organically from the weaver, dyed and stitched for her. Her shirt however was from H&M as requested by her. We do not deal with synthetic fabrics. Thank you.” their reply read.

During the finals of Bigg Boss season four, Kamal Haasan launched his own fashion brand called “House of Khaddar” through which he is going to make collections which are entirely made of handmade fabric Khadi. “I want this to become a global trendsetter. I want to use this platform to start something new. This is more than a business and a social initiative that should provide empowerment and employment to many” Kamal Haasan said in the show.

Kamal Haasan, in the show, said that he recently visited the weavers of Kancheepuram and looked at their difficult plight. Saying that the craft is dying and the workers are getting low pay, Kamal announced “I visited a number of weavers and many of them are not having jobs and livelihood. I want this brand to make them way for the jobs” the actor said.

In few episodes, the actor also said that he was wearing “Khadi”. “Yes, I am wearing handloom Khadi suit. I recently got to meet a few weavers, and after that my approach to dressing has changed. I think my father’s habit of always wearing Khadi would come to me too. I wish you (youngsters) too to have that habit” he said to the contestants.