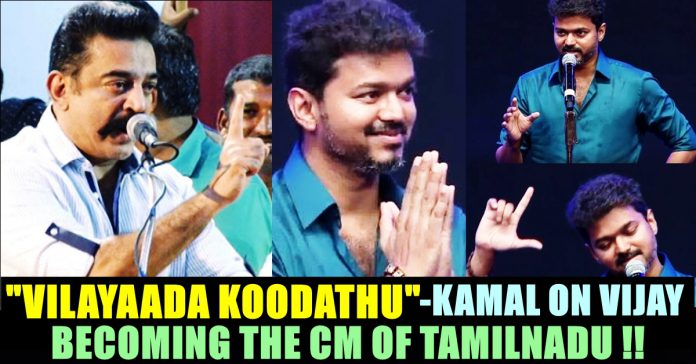 Kamal Haasan is celebrating his 65th birthday today. Vikatan youtube channel has released a part of his interaction with the reporters of the forum, today as a gesture of the legendary actor’s birthday celebration.

The actor’s birthday is being celebrated by his fans who are trending various hashtags to wshi the legendary. Along with his fans and celebrities, West Bengal Chief Minister Mamata Banerjee wrote, “Wishing you a very happy birthday Kamal Haasan Ji. The country needs more strong voices like you.” With thousands of people wishing Mr Haasan, the hashtag #HBDKamalHaasan was the top trend on Twitter.

Grand celebrations have been planned for three days, starting today.Mr Haasan’s family will unveil the statue of his father at their ancestral home at Paramakudi in Ramanathapuram district today.

In this recently released video, the actor was seen answering to a question of a reporter who asked about actor Vijay’s political entry. A reporter asked Kamal how he sees Vijay talking about becoming the chief minister of Tamilnadu wittily.

At the audio launch of his previous venture, Sarkar, Vijay said “If I become the Chief Minister, then I won’t just act like one, but will do my job with sincerity.”

While replying to the reporter Kamal Haasan said “You yourself have said that he said it in a humorous manner. I wish him not to take it as a humour. Any one can wish to become the chief minister of the state but he should improve his quality accordingly. He should exhibit his intention on the same. I have welcomed him (Vijay) way before” Kamal Haasan said in the interaction.

Apart from that the actor revealed that the happening actor of Bollywood Nawazuddin Siddiqui worked as an assistant director in his Hey Ram. He even said that Nawazuddin, Fahad Fazil and Shashank Arora are his favourite actors who are working currently.

Being a multi talented artist, Kamal Haasan is known for his achievements in his film career. Haasan has won awards including three National Film Awards, the second-most by any Indian actor, and nineteen Filmfare Awards. His production company, Raaj Kamal Films International, has produced several of his films.

What do you think on this interaction of Kamal Haasan with the reporters ?? Comment your views below !!

Previous article“Chinna Thalapathy” Bharath To Play Villain Against This Superstar !! UNEXPECTED !!
Next articleRashmika Replied Back To Distasteful Comments Made By Netizens !!

For stating "Meera Mitun" is a brand in one of his videos, Madan Gowri, a popular Tamil youtuber forced to give clarification as the...