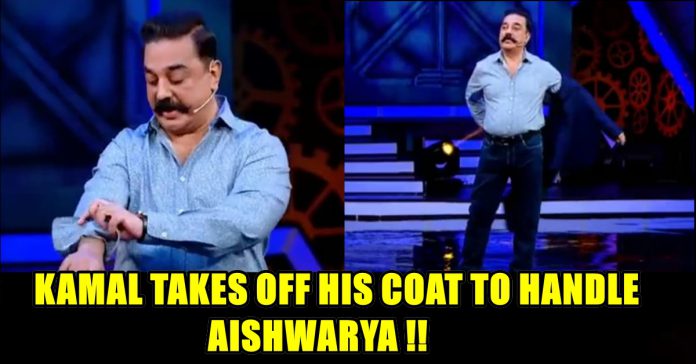 Kamal Takes His Coat Off To Handle Aishwarya !! Watch The New Promo !!

On Thursday’s Bigg Boss Tamil episode, Aishwarya continued as the dictator of the house. She gave tasks to the housemates who finally understood the task and did as told by the dictator. Aishwarya continued to be strict and meted out punishment like a true dictator. Yaashika and other housemates were sent to jail where they came up with the idea of a revolution and tried to overthrow the queen. This resulted in a huge drama in the house. Daniel, who was supposed to be Aishwarya’s commander, also disobeyed her resulting in a huge commotion in the house. Ponnambalam saw this as an opportunity to gain access to the queen and overpowered her by almost choking her and threw her in the pool. The housemates who were locked in the jail also escaped. But once Aishwarya came out of the swimming, she raged about being choked and pushed into the pool and demanded Bigg Boss open the confession room. She was not able to utter a word or explain what she was going through. Outside, the housemates fought with Janani Iyer and Daniel and explained that Aishwarya was overreacting. They also said how the last two days they took her punishments patiently and put up with her attitude. Instead of understanding that this was just a task, the housemates got involved in it personally and everyone’s ego played a huge part in the way the task ended. Bigg Boss told Aishwarya that she performed the task very well and told her to come out of her character. Aishwarya asked Bigg Boss if the task has concluded, to which Bigg Boss replied that she will be informed of the same once she goes to the living room and the episode ended. Though Bigg Boss told that they performed very well in their task, Kamal does not seemed to be like that. He latest promo suggests he is really angry but very hard to guess on what side he is. Here’s the new promo :

Meanwhile the second promo which shows Kamal taking off his Coat to handle Aishwarya wins the heart of audience there. Watch it out here :

Comment what do you think on this new promo !!

Previous articleMia Khalifa Found The Love Of Her Life ?? Check Out To See The Guy !!
Next articleWoman Caught With Lover !! To Escape She Bites Off Her Husband’s Private Part !!

Social activist, youtuber and actor Raj Mohan released a video regarding the complaint letter of Fenix's mother to the authorities through which she narrated...

Pooja Hegde of "Beast" fame got extremely upset and came up with a post in her twitter handle calling out an employee of Indigo...