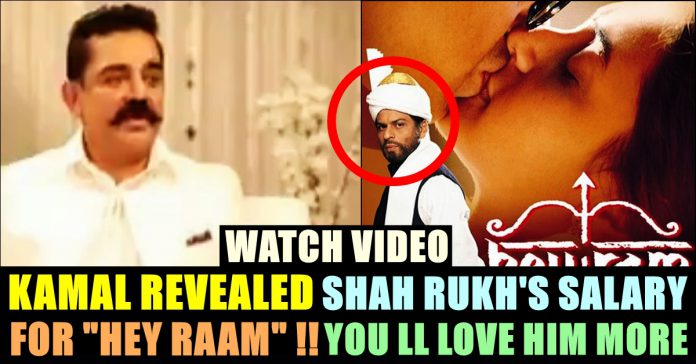 “Hey Raam” is the first ever film directed by Kamal Haasan in his film career which spans more than 60 years. He also acted in the film as protagonist along with Rani Mukerji and Vasundhara Das as female leads. The film celebrated its 20th year anniversary on the 18th of February 2020 and fans are posting their favourite moments from the film in social media platforms.

In a way of remembering the film, actor Kamal Haasan posted tweets saying that he feels glad for making that film in time. He specially thanked Shah Rukh Khan and other actors for accepting to act in the film and regretted for missing few important people with the help of whom he made the film. Check out his tweets here :

20 years of Hey Ram. Glad we made that film in time. Sad the apprehensions and warnings the film spoke about are coming true. We must surmount these challenges to the harmony of this country and we shall. Hum honge kaamiyaab. நாளை நமதே.

As one among the many who endeavored to envision Hey Ram, I thank all those who remember the film with fondness and respect. (1/3)

I sorely miss Late Messrs. ChandraHasan, Manohar Sham Joshi, Om Puri, Mohan Ghokale, Girish Karnad, Vaali, H.Shridar, Renu Saluja, Gnankkoothan, “Vikram” Dharma and many others who are not there to share this day with me.(3/3)

Along with Kamal Haasan, many fans celebrating the film which follows a cult classic today. Meanwhile a particular old video of Kamal Haasan appreciating Shah Rukh Khan is doing rounds in social media platforms. Kamal was seen saying that Shah Rukh acted in the film despite of knowing the budget of it.

“They say Shah Rukh is a businessman, commercial minded, so am I. The fact is he knew the budget of “Hey Raam”, He just wanted to be part of it. When the budget of Hey Raam ran over, he didn’t ask for remuneration.” said Kamal Haasan who further added that Shah Rukh just received a wrist watch from him for acting in “Hey Raam”. The filmmaker added that he got the Hindi rights of the film. “I am so happy that he got the rights as he completely deserves it. He is a partner of Hey Raam and it is rightful that the Hindi rights are with him. I am glad” said Kamal Haasan in the interaction.

"Special respect for Shah Rukh saab. When the budget of Hey Ram went over he didn't even took the money".@iamsrk @ikamalhaasan#20YearsOfHeyRampic.twitter.com/eWpVHpgK7N

The film revolves around a protagonist’s journey who transforms from religious hatred to love with the theme of the partition of Bengal in the background. The film which was released 20 years ago is relevant even today. This is the story of Saket Ram which was played by Kamal Haasan. The film takes place as Ram, a retired archaeologist, lies on the deathbed, on 6 December 1999, the 7th anniversary of the demolition of the Babri Mosque in Ayodhya.

This indeed proves that Shah Rukh Khan is a man of golden heart !! Comment your views on this gesture of the Bollywood Badshah !!

Bigg Boss Tamil is going to see its 3rd winner today. The first season of 100 days show which was hosted by Ulaganayagan Kamal...

Samantha reacted to a toxic comment of an online user that surfaced regarding a dating rumour of Naga Chaithanya and deleted her reply tweet...