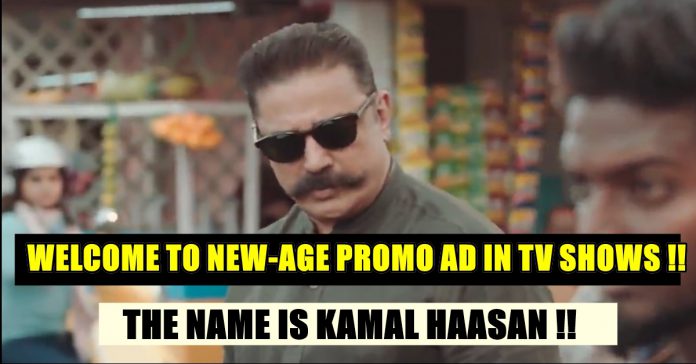 The Second Season of Bigg Boss Tamil is about to begin and here is the teaser featuring Ulaga Nayagan Kamal Hassan Once again. It was said that as Kamal has entered politics he won’t be hosting Bigg Boss 2, but to the surprise, he is doing it again.Bigg Boss is a Tamil reality TV show in its truest essence. With a 100 days of unadulterated drama, excitement, anticipation, fun, and of course, superstar Kamal Haasan as the host, this is a show you can’t afford to miss. Celebrities live in an isolated house cut off from the rest of the world. They are put with challenging tasks to avoid elimination and win the grand prize.Watch the Teaser below.

In this new promo teaser Kamal Haasan explores the perspectives of people’s mind that weighs a person’s character with their out look. As far as TV Promos are concerned this new promo is really innovative and why not we always love to witness Kamal doing gimmick expressions with his very own artistic touch. It is really lovable to see Kamal Haasan on screen without the microphones and press reporters after all these days. Watch the promo yourself :

Previous articleAnother Season !! Same Old Story !! : RCB Out Of The Tournament !! Twitter Reacts !!
Next articleKumaraswamy Wants Rajinikanth To Learn Something About Karnataka Before Making Comments !!

Ever Witnessed Vignesh Shivan In This Tamil Film As Hero’s Friend ??

Right from legendary filmmaker Bhagyaraj to epitome of grandeur Shankar, we have seen many filmmakers appearing as junior artist in the films they worked...