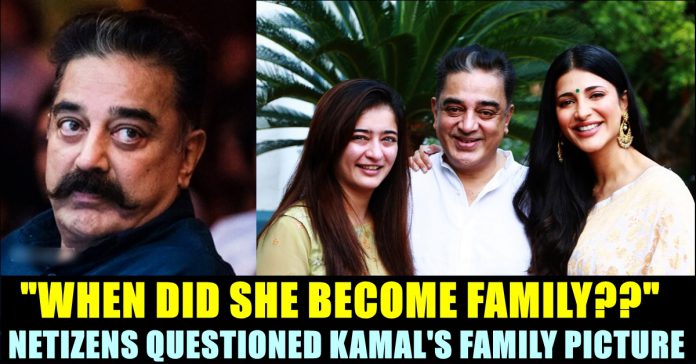 Actor-turned-politician Kamal Haasan turns 65 today. The year also marks his sixty years in Indian cinema. He made his debut in films as a child artists at the age of five and evolved into one of the most versatile actors in the country.

The actor’s birthday is being celebrated by his fans who are trending various hashtags to wshi the legendary. Along with his fans and celebrities, West Bengal Chief Minister Mamata Banerjee wrote, “Wishing you a very happy birthday Kamal Haasan Ji. The country needs more strong voices like you.” With thousands of people wishing Mr Haasan, the hashtag #HBDKamalHaasan was the top trend on Twitter.

Grand celebrations have been planned for three days, starting today.Mr Haasan’s family will unveil the statue of his father at their ancestral home at Paramakudi in Ramanathapuram district today.

“It’s an important day. My dad’s death anniversary too. He’s a teacher who taught me through his life and death. In his name, we plan to start a talent development centre,” Kamal Haasan said.

Meanwhile, a family picture of Haasan has surfaced on social media platforms today in which we can see Chaaru Haasan, Shruthi Haasan, Akshara Haasan, Suhaasini and others. But who grabbed the attention of the Netizens is actress Pooja Kumar who was seen in the picture along with the family of Kamal Haasan.

Pooja Kumar shared screen space with Kamal Haasan in Vishwaroopam and Uthama Villain. Since then both of them were seen together in certain occasions. Now this picture has made Netizens to raise their eyebrows to question about the actress’s presence in a family picture.

How is pooja Kumar related to Kamal’s family? https://t.co/ITx84h9Ugb

However we can also see Zareena Wahab in the picture who acted with Kamal Haasan in number of movies. Instead of calling it as a picture of Kamal Haasan’s family and friends, Netizens misunderstood it as a family picture of the actor it seems.

Earlier Kamal Haasan married dancer and actress Vani Ganapathy and the couple got divorce after 10 years. Then he married actress Sarika and got divorce from her in the year 2004. The actor also had a relationship with his co-actress Gauthami.

Previous article“Acting In That Movie Was The Biggest Mistake In My Career” Nayanthara Revealed !!
Next articleParthiban Hints Blockbuster”Andhadhun” Is A Copy Of His Film ??