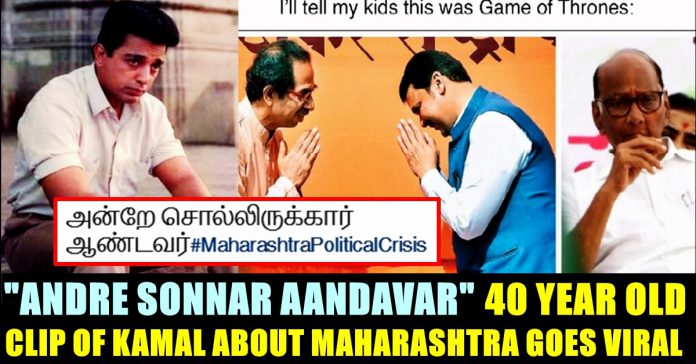 The furore in Maharashtra’s political state grabbed the attention of entire country. Within 24 hours of time span, a major twist took place in favour of BJP party.

“Ajit Pawar’s decision to support the BJP to form the Maharashtra Government is his personal decision and not that of the Nationalist Congress Party (NCP). We place on record that we do not support or endorse this decision of his,” Sharad Pawar tweeted.

BJP’s Devendra Fadnavis returned as the state’s chief minister again, backed by NCP leader Ajit Pawar, who was sworn-in as the deputy chief minister at Raj Bhavan early Saturday. The political stunner came at a time when deliberations between Congress, NCP and Shiv Sena seemingly reached the final stage on Friday.

Meanwhile an old video of Makkal Needhi Maiam president Kamal Haasan is doing rounds in social media platforms. Actor turned Politician Kamal Haasan is known for his futuristic vision in his movies. He is highly believed as an actor who predicts the future in advance. For instance he talked about Tsunami in his Anbe Sivam movie, a year before it occured in Tamilnadu.

Kamal Haasan is also known for the way he answers to certain questions asked by media and by his fans and critics. BJP Subramaniyam Swamy Called Kamal As “Moron” !! Check Out How Kamal Gave Him Back !! On 2017, when Kamal Haasan met the chief minister of Kerala to seek advice in politics, in a program named as “Yaathum Tamizhey”, he was asked why he didn’t meet Tamilnadu chief minister. To that question, Kamal Haasan sarcastically said “I wish to meet our state’s chief minister as well but I am afraid of the fact that the post will change hands anytime soon”

Though he said it in a humorous manner, after his statement, within a short time span, Tamilnadu saw three chief ministers including O.Panneer Selvam and Edappadi Pazhaniswamy. Now Kamal has reacted in a same way to the furore that took place in Mahashtra’s political situation, but this time not in person, but through one of his oldest movies.

Varumayin Niram Sivappu is a 1980 released critically acclaimed film in which Kamal Haasan would have done a role of a jobless graduate. In the film when Kamal attends an interview to seek job, one of the interviewers would ask him to answer the name of the chief minister of Maharashtra. To that question Kamal will question back the interviewer by asking “Today, Yesterday or the day before ?? because there is a change everyday you see”. This indicates that the state was in same political situation 39 years ago and reports suggests that Sharad Powar was the cause at that time as well.

This video is now going viral in social media platforms with various captions appreciating Balachander, the director of the movie and Kamal Haasan. Check out some of their reactions below :

Of all things Kamal Haasan is said to have predicted, the one on Maharashtra Politics is the best 🤣

Comment your views on this clipping from the cult classic and the political situation of Maharashtra !!

Previous articlePopular Actress Criticized “Thalaivi” First Look !!
Next articleReporter Forced This Actress To Talk In Hindi !! Watch How She Replied !!

Mohan G, director of Tamil film industry came up with a solution to stop people like "Karuppar Kootam" from making such derogatory videos in...

The people of Tamil Nadu casted their votes for this Elections 2019 and it’s not just the common folk but celebrities, too, who were...

Vani Bhojan Revealed How She Got Approached For Casting Couch !!

Vani Bhojan who is basking in the success of her recent release "Oh My Kadavule" has revealed how she got approached for casting couch...