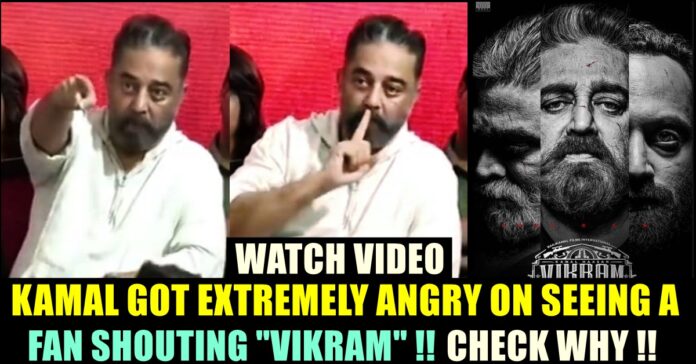 Kamal Haasan Got Angry & Shushed A Fan Who Shouted “Vikram”!! Check Why

Later, during his speech, Kamal Haasan said that it is a campaign for “blood donation” and we are not selling blood here. “Shouting “Vikram” could make others think that we are selling (Vikrom- Tamil word for “sell”) blood. That’s why I got angry and shushed him” Kamal Haasan said.

“I have been doing this (blood donation camps) for the past 40 years. I have been continuosly speaking about politics and social service in all my films. In Nammavar, I would have spoken about those who can donate blood and who cannot donate” Kamal Haasan said in the event.

“Social service is my politics, the kind of politics may not be interesting and I am expected to speak with flair. I have movies for that” the actor said. He also sent a message to his party members saying that he would continue to act in movies in order to fund the party.

While Kamal Haasan was sitting an listening to the speeches of others, a voice from the crowd shouted “Vikram” to which the actor pointed out the person who made the sound and asked him to be silent. Kamal Haasan was seen visibly upset over the fan’s gesture.

Later, during his speech, addressing about the same, Kamal Haasan said “The reason behind why I angrily shushed a person who shouted my film’s name “Vikram” is, for past many years, blood donation has been a business in many general hospitals. When I started this blood donation camp, they asked me why I am involving myself in and asked me to stop doing it”

“Irrespective of those incidents, I taught my brothers about this “duty” and the reflection is 4 lakh litres of blood donation. If those 4 lakh litres reached the merchants, they would have earned crores of money and people would have suffered. In that case, when we start speaking about this “blood donation”, if a person shouts ” Vikram” from behind, chances are there for people to think that we are also selling blood” Kamal said humorously.

“That’s why I said, I can sell that “Vikram” in my way and ensured that this is “donation”. We should know what is business and what is not. Politics is not a business” he further said.

Along with the fans of actor Vijay, celebrities also eagerly waiting to witness the movie "Master" in which Vijay and Vijay Sethupathi are going...

Fans Wants To Remove Mumtaj From BIGG BOSS House After Seeing Her Rude In This Promo !! : SHOCKING !!