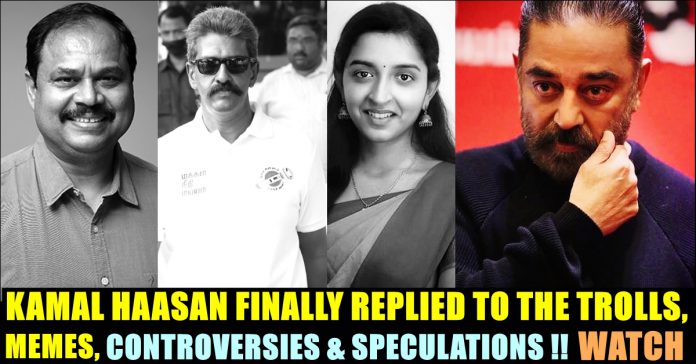 Makkal Needhi Maiam president Kamal Haasan finally released a video clarifying about his future in Tamil nadu politics which became a subject to trolls and controversies for the past few days. Followed by the resignation of several party members, Kamal Haasan, in the 4 minute long vide, has confirmed that he continue to involve in politics till his last breath and said that Makkal Needhi Maiam would continue to contest in politics till the existence of politics.

“We have a history of tasting success after learning from our failures. Few people find me as a dictator as I saw unknown, lesser know people as the stars of the new alternative politics. When I made them the administrators/leaders of prominent positions right after their joining, they saw it as peak democracy. Now, as time passes, they happened to forget it.” Kamal Haasan said, replying to the allegations of many of the party members who reasoned “lack of democracy” in the party as the reason for their resignation.

“Everybody knows about the transparency I showed in having alliances and the democracy I displayed by letting the party members to make a decision over it. Taking the responsibility after facing the loss is a good attribute of a decent democrat. Few think, having space to blame others for their loss is democracy. It is not democracy at all” Kamal Haasan further said in the video and went on to compare “Makkal Needhi Maiam” to a well that never gets dry.

The “Vikram” actor compared the resigned party members with nomads and merchants who would stay in one place till they get what they need. “They might come back to our well “Makkal Needhi Maiam”. But we won’t let them pollute it at that time” Kamal said. “We don’t have to answer to the baseless accusations of them as they do it merely to hide their flaws. Time will answer to them” Kamal Haasan said and advised the followers of the party not to involve in abusive verbal spats while making their points supporting the party’s stand.

“My life, speak the truth. Argue, my dear. My beautiful Tamil language is enough to do it. Don’t let our language get polluted. Our shouldn’t go low. Everyone will see the newly transformed “Makkal Needhi Maiam” soon. No one could stop our journey. I will continue to be in politics till my last breath. Makkal Needhi Maiam will exist till politics exists” Kamal concluded the video.

On 6th of May, Prominent members of Kamal Haasan’s Makkal Needhi Maiam announced that they are resigning from the party. The decision came from the politicians after the party failed to win any of the seats in the Tamil nadu assembly election. Recently Velacherry contender Santhosh Babu IAS, Maduravoyal candidate Padmapriya, CK Kumaravel left the party citing personal reasons as well. Vice President Mahendran, in his press release said that there is no change in the approach of Kamal Haasan in taking the party forward even after the huge loss.

A brand new teaser of Chiyaan Vikram’s Dhruva Natchathiram released last night on the internet. The teaser has many high octane action sequences and...