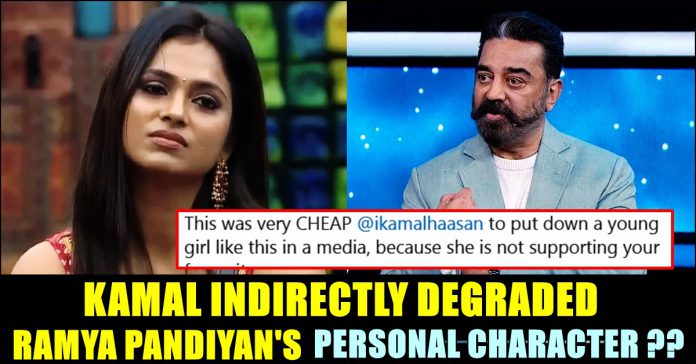 The weekend episode of Bigg Boss season 4 saw Kamal Haasan evicting Aajeedh from the Bigg Boss house for receiving less number of votes from the audience. While analysing the happenings that took place inside the house, Kamal asked Aari to sit alone and made the other contestants to tell what irks them the most about him.

“Bigg Boss is not just a show about tasks. If it is the case, they would ask us to leave after the shooting of the task is done. It is about people who doesn’t know each other living together by adjusting and appreciating. On that note and on that basis, I nominate him as the least involved and most boring person for the past 90 days” She added.

Responding to her opinions about Aari, Kamal asked Aari to work on it. “The reason behind I made you to sit alone is to observe their perspectives and to act accordingly. Ramya says that you are the least involved and most boring for the past 92 days, find what is making her to feel that way and improve yourself. You are not equal to Balaji’s physical height. His body and biceps are big. Accept and Appreciate it. After that, you have to work on what makes you a better person than him” Kamal advised Aari.

On seeing this statement from Kamal Haasan, a number of followers got disappointed and accused Kamal Haasan of degrading Ramya’s character. They believed that Kamal indirectly denoted that Ramya is attracted to Balaji’s phyisical appearance and feels Aari is boring. “Host publicly shaming a female contestant in the show. Pathetic” wrote a follower to express their opinion whereas another one said “how is height & biceps has anything to do with “Swarasiyam”? WHAT THE HELL IS HE TRYING TO SAY?”

This was very CHEAP @ikamalhaasan to put down a young girl like this in a media, because she is not supporting your favourite…

how is height & biceps has anything to do with "Swarasiyam"?

Earlier Kamal criticized Ramya for being biased. He said that Ramya is letting Balaji talk in an argument and tries to solve the issue when Aari tries to give explanation. “Unnecessarily taking sides and not playing for yourself” said Kamal about Ramya which left the supporters of the “Joker” actress in a dejected state.

Jiiva Reacted To The Review Of “Blue Sattai Maaran” !!

Jiiva reacted to the "Gypsy" video review of popular Tamil movie reviewer "Blue Satta" through his official twitter account. The actor who is known...