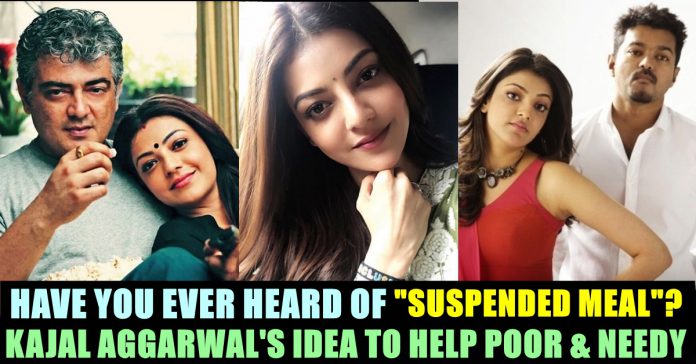 India has been able to lift a significant percentage of its population out of poverty, but many still live in it. India had 73 million people living in extreme poverty which makes up 5.5% of its total population, according to the Brookings report. A recent report has suggested that the existence of COVID 19 may double the poverty rate in India. This pandemic is as much a social and economic crisis as it is a humanitarian one.

Considering the uncertain path that lies ahead, helping the country’s poor become self-sufficient and better prepared can prove to be the best weapon against the deadly virus, and such a DBT can go a long way in that. Starvation caused by poverty is considered as one of the biggest problem in our country. People are willing to go out and work even at this pandemic situation only avoid dying due to starvation. However, actress Kajal Aggarwal has gave a thought about the ground reality and came up with a strategy that is widely being used in Western countries to prevent people from starving in our country.

No. It’s not a headache.

The actress who is known for pairing with the top actors of Kollywood film industry, enjoys a huge followership in social media platforms, especially in the photo posting social media app. Currently, she is enjoying 14 lakh followers in Instagram and engaging them with her frequent post and updates.

Now, through one of her Instagram story, Kajal came up with an idea influencing people how to help the poor and needy during their toughest times. She introduced the terms “Suspended Coffee” and “Suspended Meal” to her followers and explained how it is slowly becoming into practice in Western countries.

The actress wants us to order “Suspended Coffee” or “Suspended Meal” or “Suspended Tea” whenever we visit a restaurant or hotel. Those “Suspended Meals” are meant for the poor and needy who would visit the hotel sooner of later requesting free food. “A woman giving money in the “Five coffee, two suspended”. Gave money for 5 coffees and carried two cups of coffee. Another came and ordered : “Ten Coffee, five suspended” He paid for ten and grabbed 5 coffees. And another one ordered : “5 meals, two suspended” He paid for five meals and took three luck packets.” read the story of the actress.

Her story further said that a old man with shabby clothes approached the counter and asked “Any suspended Coffee?”. The woman at the counter served him a hot cup of coffee. Another bearded man who came to the counter asked “Any suspended meals?” and received a parcel of hot rice and curry and a bottle of water. “Helping the unknown and poor, even without knowing their face is the best form of charity.” said Kaajal who added that this came to practice in Europe and is spreading throughout the world. “Hope we too can grow this level” the actress wrote.

This is indeed an excellent initiation and must be welcomed by a country like India in which people die of starvation everyday. On the front Kajal Aggarwal is expected to be seen in “Indian 2” and “hey Sinamikaa”. Comment your views on this story of the actress !!

Director Seenu Ramasamy Cried On Stage Because Of Ilayaraaja !! WATCH