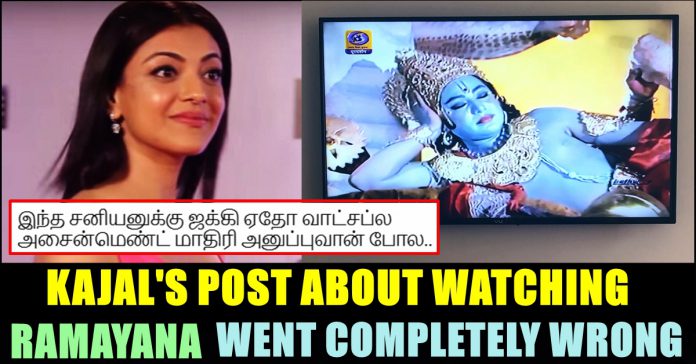 Actress Kajal Agarwal’s quarantine post receiving several trolls and criticisms. We are witnessing many kind of posts and videos in social media from people who are not associated with Medial and Police department. To kill the time they are spending in their respective homes in this quarantine period, people are finding social media as best escape plan.

Memes, jokes, work out videos, pictures of books, film suggestions are pouring in Internet as Indian government announced lock up till 14th of April month to prevent the Corona virus from spreading. People are glued to Internet to kill the quarantine period. Right from high profile politicians to cinema celebrities, everyone are sharing how they are killing the time and giving suggestions to their followers. Many of the heroines are also conduction chat sessions with their fans as they are forced to be in home.

Now, actress Kajal Agarwal who is known for acting in films like Thuppakki, Jilla, Vivegam has uploaded a post in her official twitter account, only to get criticized heavily by her followers. In her post, Kajal uploaded a picture of her watching the historic “Ramayana” exclusively in Doordarshan channel. “Taking me back to childhood. #Ramayan and #Mahabharat on
@DDNational with the entire family! This was our routine weekend plan. Smiling face with heart-shaped eyes so glad it’s restarted, great way for kids to learn Indian Mythology.” Kajal wrote in her tweet.

Taking me back to childhood. #Ramayan and #Mahabharat on @DDNational with the entire family! This was our routine weekend plan. 😍 so glad it’s restarted, great way for kids to learn Indian Mythology. pic.twitter.com/ZFc4X0oTFl

This post of Kajal Agarwal gained her severe criticisms as most of them schooled her that “Ramayana” is not Mythology but history. Others said that Kida has nothing to learn in Ramayana. Check out some of their reactions below :

And why the f kids have to learn Mythology? Rather the government can air, scientific programs, DIY science experiments and sorts. S*** heads with agenda is more dangerous than the virus https://t.co/onLsoF9p3E

It has nothing to learn

Please correct the last word kajal. Its not mythological. Its not stories its fact and truth. https://t.co/EV5gs7anSG

Kajal Aggarwal was born and brought up in a Punjabi family settled in Bombay. She has a younger sister Nisha Aggarwal, an actress in Telugu, Tamil and Malayalam cinema. On the work front, She is expected to appear in Indian 2 and Paris Paris. Comment your views on this post of the actress.

Previous articleInfosys Terminated Its Employee For His Social Media Post !!
Next articleSakshi Got Extremely Angry For Degrading Dhoni !!

Actor Ajith kumar who is known for his massive fan following, lost one of his ardent fans on Wednesday and the entire Tamil internet...

A report on "Bigil" facing 20 crore loss has been doing rounds in the social media platforms for past two days. Bigil released on...