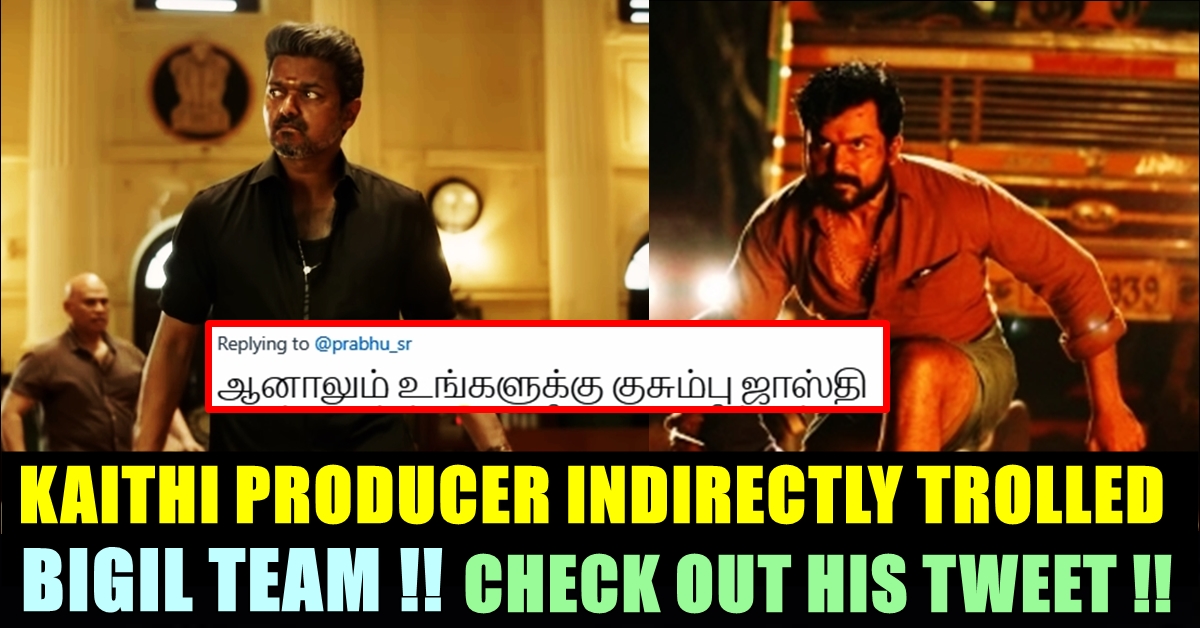 Now, before Bigil team announcing its exact release date, producer of Kaithi and the founder of Dream Warrior Pictures, S.R Prabhu has made it clear that his film is going to get released on October 25 which is two days prior to Diwali festival.

Before announcing this release date, S.R Prabhu uploaded a post in his twitter account, in a way of trolling the Bigil team. The post which showed a picture of famous comedy scene of Santhanam from “Vaalu” movie, contained a caption saying “All set!! 😂 5pm today #KaithiUpdate #kaithi #KaithiDiwali”

Many fans who saw this tweet of S.R Prabhu thought that he is trying troll the Bigil team for not announcing their exact release date as it is only 1 week left for Diwali. Check out some of their comments :

Meanwhile, Bigil’s producer Archana Kalpathi has announced that Bigil will also release on the same day of “Kaithi’s release.

The most awaited trailer of Bigil released on Saturday and left the Internet in explosion. The film which marks the third collaboration of Atlee and Vijay, has actor Vijay in the lead in three different get ups.

On the other hand Kaithi’s trailer looked so intense and was directed by “Managaram” fame Lokesh Kanagaraj who is considered as one of the new age filmmakers. The film has no heroine and songs which instigated the fans to anticipate for the movie’s release.

What do you think on both the films competing each other ? Comment your views !!

This Leading Television Channel Bought The Satellite Rights Of “ASURAN” !!
“You Are Nothing Without Me” Meera Mitun’s Reply To Abhirami’s Reaction !!