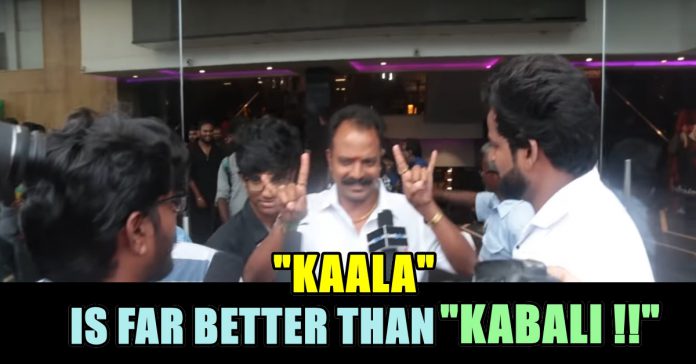 Kaala Need Another 280 Crores To Be Called As A Hit !! : Here’s The Exclusive Public Review !!

Superstar Rajinikanth’s Kaala, slated to release on June 7 worldwide has earned a massive Rs 230 crore before the release of the film through its theatricals and music rights. This is not inclusive of the Karnataka region, where the release is currently in a dicey situation. According to a report in Andhra box office, the film has collected Rs 70 crore at home turf in Tamil Nadu. Andhra Pradesh and Nizam regions come next with Rs 33 crore, Kerala with Rs 10 crore and the rest of the country with Rs 7 crore. The overseas theatrical rights have been sold at Rs 45 crores, making it a Rs 155 crore total just for the theatrical rights exclusive of Karnataka. Then comes the broadcast rights and music rights, which is Rs 70 crore and Rs 5 crore respectively. With this, it is clear that the film needs to collect Rs 280 crore gross to be called a hit, and this is inclusive of the Telugu and Hindi dubbed versions. If the film manages to release in Karnataka, they would have to earn a gross of Rs 300 crore. Considering the crowd that the superstar pulls in the opening weekend, this might not be a problem. For instance, Pa Ranjith and Rajinikanth’s previous film collected Rs 650 crore, with Rs 259 crore at the foreign box office alone.

Regarding the release in Karnataka, the producer of the film Dhanush and his wife Aishwarya Dhanush have filed a petition at Karnataka High Court seeking directions to the state government and Karnataka Film Chamber of Commerce (KFCC) for smooth release of the film. In the plea, Dhanush, who is Rajinikanth’s son-in-law, submitted that it is the fundamental right of the petitioners under the Constitutionto exhibit the film.

“CBFC has issued a certification under Section 5B of the Cinematograph Act, 1952, for the release of ‘Kaala’ after following due process and adhering to all guidelines. After receiving such a certificate, it is the fundamental right of the petitioner under Article 19(1) of the Constitution to exhibit the film,” the petitioners submitted, according to PTI. The petitioners also have sought security at theatres and for movie-goers, directors, producers and cast associated with Kaala in Karnataka.

Comment your views on “Kaala” If you have watched already !!

Actress Amala Paul posted the popular art which widely being circulated in social media and conveyed an important message to her followers in the...