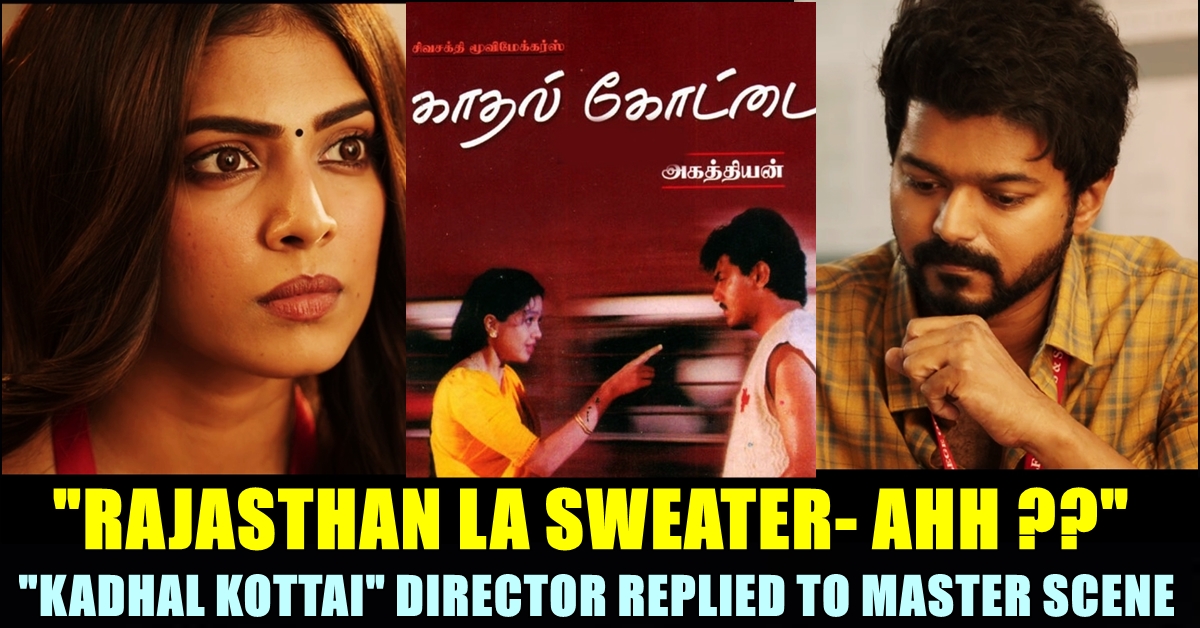 Ace director Agathiyan who is known for directing some of the notable films in Tamil film industry, replied to a scene that took place in the recently released “Master” film based on one of his successful films “Kaadhal Kottai”. The filmmaker said that his film doesn’t contain any kind of logic loopholes but those who accused his film of having it lack knowledge about geography.

“Master” which shows Vijay as an alcoholic professor, contains Vijay Sethupathi, Arjun Das and Malavika Mohanan as a gangster, henchman and a college professor respectively. Locking horns with John Durairaj played by actor Vijay, Vijay Sethupathi who represented Bhavani, comes as a ruthless killer who uses juveniles as his pawns to establish his criminal enterprise.

Being an alcoholic, JD, in the pretext of telling his love stories, would narrate the famous love stories that took place in the films that were released in Tamil film industry. To the women who work in is college, JD would tell the love story of “Mowna Ragam” whereas he would say the love story of “7G Rainbow Colony” as his real life to the watchman.

While talking with his servant, JD would narrate the love story “Vaaranam Aayiram”. While talking to Charulatha, played by Malavika Mohanan, JD would tell her the story of “Kaadhal Kottai”. He would say that her lover sent him a “sweater” while he was residing in Rajasthan. Charu would ask back how could one wear sweater in Rajasthan where the weather would be immense hot.

Now, director Agathiyan who took part in an interaction with a youtube channel, said that people who lives in/visited Rajasthan would know about the weather. The filmmaker said that the female lead in the film Kamali was living in Ooty where sweater couldn’t be avoided and is considered as a primary “gift” for any kind of event.

“The cold in Rajasthan in intense. People who experienced know about it. I visited the place while hunting locations for “Kaadhal Kottai”. The cold will be unbearable. On the other side, Kamali was living in Ooty where “Sweater” is considered as a gift. There is no flaw in the film geographically. If someone is finding it as a loop hole, then I would say that they don’t have enough knowledge in geography” the filmmaker said.

It is notable that director Agathiyan is a father of Vijayalakshmi, Kani and Niranjani. All the three of them were married to filmmakers Feroz, Thiru and Desingh Periyaswamy respectively. Agathiyan also shared about his relationship with his three son-in-laws in the interview and expressed his wish of making a come back in the film industry soon.