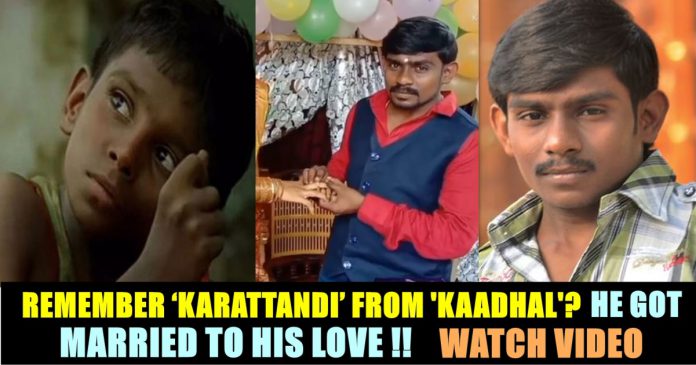 The wedding video of Kaadhal movie fame Arun Kumar was recently uploaded on YouTube. Arun Kumar was known was his best acting in the movies like Kaadhal, Sivakasi, Unakkum Ennakum, and many more.

Kadhal Arun is a South Indian Supporting actor who is known for his work in the Tamil film industry. Arunkumar also is known as Kadhal Arun. He is from Thoothukudi. He made his acting debut in the film Kaadhal in the year 2004. Starring Bharath and Sandhya the super hit movie kaadhal was directed by Balaji Sakthivel. The movie was produced by director Sankar is based on a true story.

After the movie Kaadhal hit the box office success, it was dubbed and released in Telugu. And the movie was remade in the following languages, Kannada, Bengali, Marathi, Nepali, Bengali Bangladesh, and Punjabi.

Arun Kumar’s role in the movie as Bharath’s assistant earned him huge appreciation from the audience. He gained popularity for his portrayal as Karattandi as a child artist. Though he had very small roles in the movie, his notable acting performances added credit to it.

Following the success in Kaadhal, Arun Kumar appeared alongside actor Vijay in the 2005 action film, Sivakasi, as one of his friends. In 2006, the cinema audience saw him in the movie Unakkum Ennakum starring Jeyam Ravi and Trisha. After a gap of three years, he again appeared on screen with the movie Kadhalna Summa Illai. His other releases include the Tamil movie Elamari, where he appeared as the main comedian.

The video of his wedding was uploaded on YouTube on the 29th of August.

It was reported that Kadhal movie cast Sugumar had attended the wedding of Arun Kumar. Kaadhal Sugumar acted as the friend of actor Bharath in the character Stephen, which was even a notable role in the super hit movie.

It was further reported that few other Kollywood artists have attended the wedding of Arun Kumar.

Previous articleBigg Boss Fame Vaishnavi Complains To The Police!!
Next articleThese Celebrities Are In Talks To Take Part In BIGG BOSS SEASON 5 ?? CHECK OUT

Since the release of Ajith kumar’s “Nerkonda Parvai”, fans of actor Ajith didn’t see a single release. The film got released on 8th of...