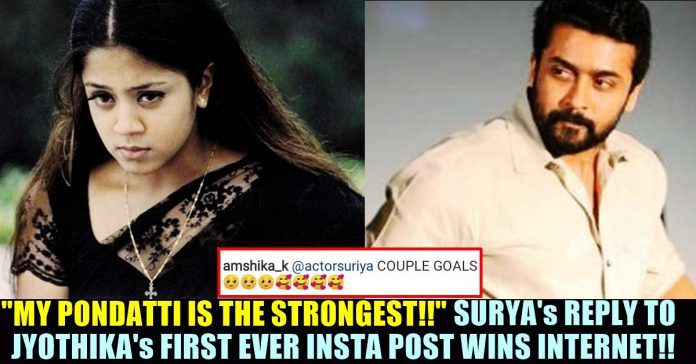 Actress Jyothika has made her entry to Instagram on 31.08.2021. As her first post, Jyothika has shared her photos from her trip to the Himalayas on 15.08.2021. Actor Surya has commented on her post and has welcomed her.

Actress Jyothika, following her half-sister Nagma, made her debut in Kollywood in the year 1999 in the movie Vaali, starring Actors Ajith and Simran in lead roles. She acted only in a small portion alongside Actor Ajith. Following this movie, she acted as the heroine in Poovellam Ketupaar with Actor Surya. From then on Jyothika became a crush for the youths. She was a part of huge movies like Kushi, Dumm Dumm Dumm, Chandramukhi, Thenali, Dhool, Kaaka Kaaka, Sillunu Oru Kadhal, Mozhi. She acted with all the leading actors of Kollywood in her first innings. After her marriage to Actor Surya, she took a break and gave a remarkable comeback in the year 2015 through the Malayalam remake of 36 Vayadhinile. Jyothika has been breaking the stereotypes attached through her movies in her ‘second innings.’ She is still the favorite of people and it has increased to many folds.

Actors Surya and Jyothika have a huge fan base in Tamil Nadu. They married in the year 2006 after convincing their parents. Everyone admires the couple so much. Everything they do as a couple gains millions of hearts. They also share the love they have for each other without any hesitations. People admire them talking about each other in shows. They also show their full support for the upliftment of society.

On Instagram, many accounts under their names were created. These accounts shared photos and videos of the actor and actress. People were waiting for their entry on Instagram. Actor Surya made his entry in 2020. To everyone’s shock Actress Jyothika made her entry into Instagram on 31.08.2021. She has shared her trip to the Himalayas with a crew as her first post with a wonderful caption, “Life is only an existence unless we start living it !! 😇” She has got a million followers in a day.

Surya has commented on the post and has said he is thrilled about her entry. This has attracted the people even more.

Many fans are exhilarated by Jyothika’s entry and have replied to her coming on Instagram.

Previous articleThese Celebrities Are In Talks To Take Part In BIGG BOSS SEASON 5 ?? CHECK OUT
Next articleActress’s Tweet About Eating “Beef” Goes Viral !!