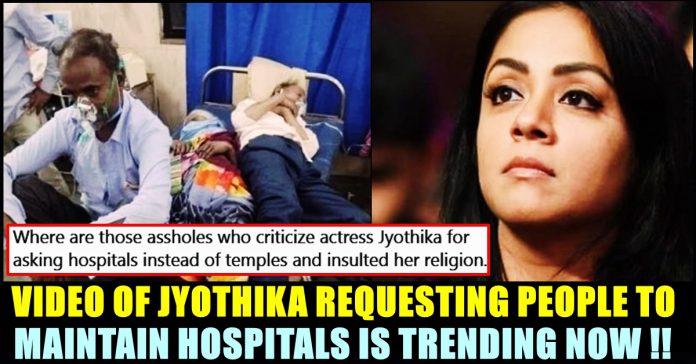 Months ago, a set of people severely opposed Jyothika’s comment on maintaining hospitals rather than giving importance to temples. Now, as the entire country is suffering due to the lack of hospital facilities, the video of Jyothika’s statement is doing rounds with people thrashing those who criticized the actress at that time. It is notable that the actress donated Rs. 25 lakh to the Health Minister of the State, Dr Vijayabhaskar after her speech for the upkeep of the government hospital at Thanjavur.

Actress Jyothika’s speech on building hospitals and schools instead of spending money on temples, irked a separate set of people and made them to raise voice against the actress. The speech was made by the actress at Just for women awards 2020.

After receiving an award from actress Simran for acting in “Ratchasi”, Jyothika explained her experience while shooting for her film in Thanjavur. In her speech, Jyothika said that people asked to visit Brihadishwara temple before leaving the town.

“They asked me not to miss witnessing the grandeur of the temple. I have already went there. It was so beautiful that their maintenance is on par with the palace in Udaipur. Next day my shooting was in a hospital. It was very badly maintained and I couldn’t put words to what I saw in the hospital. My request is, people are spending lots of money in maintaining a temple and paying lot of money to temples as devotees. Please spend the same amount of money in building schools and hospitals.” said Jyothika amidst the loud applause of people from the auditorium.

“I felt so bad and I haven’t went to the temple. After seeing the state of the hospital, I didn’t go to the temple. Hospitals and Schools are as important as temples” the actress added. Watch the video below :

Many people who belong to BJP party criticized the actress saying that she is degrading Hindu religion. Now, on seeing COVID 19 patients struggling due to lack of beds, oxygen, many people came up with tweets reminding the actress’s relevant statement. “Where are those assholes who criticize actress Jyothika for asking hospitals instead of temples and insulted her religion.” a social media user wrote in his tweet on Thursday.

Who and what saves our lives ??

Preists & Temples saves us unlike our Doctors & Hospitals. JAISRIRAM pic.twitter.com/Lav4236Ak8

Where are those assholes who criticize actress Jyothika for asking hospitals instead of temples and insulted her religion.

" Temples are important same time hospitals should be given more priority" were highlighted by the actress Jyothika @JyotikaFansClub @narendramodi @ikamalhaasan last yr in Tamilnadu after seeing the govt hospitals worst conditions, BJP throwed nasty words on her. pic.twitter.com/g5f6dIkHwD

Hospitals needed even when temples are closed during pandemic. Jyothika was bit polite in her statement . https://t.co/UYOS0LLcYU

Those who are keenly following IPL for years would have known definitely known about Mayanti Langer, a popular host who appears before the start...

Andrea Jeremiah  is well known face for Telugu and Tamil  audiences. She made her Telugu debut with Tadakha, directed by Kishore Kumar Pardasani, who directed Konchem Ishtam...

After making history with his Javelin throw ability on Saturday, 23 year old Neeraj Chopra has been grabbing headlines for various other reasons. After...

For Missing Kalyani Priyadharshan, Actor Got Angry & Questioned His Director !!

Venkat Prabhu's directorial "Maanadu" is finally going to see the light it seems. The film which got initiated during mid 2018 with a first...